Topps Updates & Highlights have been out for a week, and the set is already causing a fair amount of controversy.

I guess I’ll check around this weekend to see if the card shop (or any of the big box retailers) have any for me to buy.

Somebody else  can worry about the upside-down cards, prom queen politicians and the like.  I’m only concerned with one thing: how many Mets made it into the set? 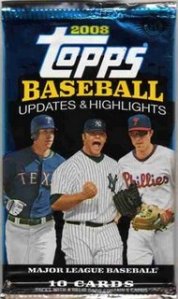 A quick scan of the checklist reveals:

Ten Mets… not bad at all. I really didn’t need another David Wright or Billy Wagner, but NL Comeback Player of the Year Fernando Tatis makes up for it. I doubt anybody will be very excited to pull Chris Aguila or Robinson Cancel, but I’m happy they’re each getting a Mets card.

In addition to the base cards, there are also a variety of parallels (gold #’d to 2008,black #’d to 57 – hobby & HTA boxes only,  platinum 1/1, printing plates 1/1 – hobby boxes only.) One hundred cards, including at least three of the Mets, have mini silk versions #’d to 50 that are only found in hobby and HTA boxes

The silk cards look pretty slick, but I don’t really see the point of the other parallels.

Topps also included All-Star Game memorabilia cards. I’m not really that big a fan of the “game-used” cards, but I like these. Maybe I’ll be able to track down the regular versions of the two Mets?

Topps is including a Ring of Honor set (which is also apparently affected by an error/gimmick). I’m not sure I see the point, really, but they’re trying to appeal to me by including a special New York Mets Ring of Honor insert set focusing on the 1986 World Series winners. Maybe I’ll collect these if they turn out to be common enough.

For some reason, Ray Knight made it into both the regular set and the Mets one.

Topps included original sketch cards this year. Some of them look quite slick, others not so much. Apparently players may have multiple sketch cards, which are each 1/1 ?

For some reason, there are more 2007 Year in Review cards in the 2008 Topps Updates & Highlights set. I’m not a happy camper at the thought of encountering more Tom Glavine cards…

There’s another David Wright autograph (one of a very few stars in the Year in Review autograph set):

And next year we get to watch the World Baseball Classis again, because Bud Selig tells us it’s fun. So Topps is getting an early start with some preview cards.