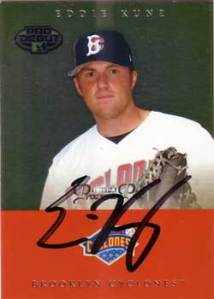 Eddie Kunz, a highly-touted prospect in the Mets farm system, reached the big leagues just over a year after being drafted with the 42nd overall pick in the 2007 amateur draft.

In limited opportunities, Kunz struggled and never seemd to gain interim manager Jerry Manuel’s trust. Kunz did not receive a September call-up, but was instead sent to the Arizona Fall League for the second year in a row. Unfortunately, Kunz is not dominating the hitters in Arizona, either.

With Manuel secure in the manager’s role for 2009, Kunz is going to need to impress early in spring training if he hopes to be considered for the Mets bullpen next year.

I got this TriStar Projections card signed through the mail earlier this season while Kunz was playing for the Binghamton Mets.

2 thoughts on “Autograph of the day: Eddie Kunz”