I found a pair of minor league team sets in a dealer’s 50 cent box at a baseball card show yesterday, so naturally I had to buy them. I’m going to save the 1989 Triple-A All-Star set for another time and focus on the other set I bought: ProCards’ 1990 Southern Oregon A’s.

The Southern Oregon A’s, later re-named as the Southern Oregon Timberjacks, played at Miles Field in Medford, Oregon, from 1979 to 1999. The team moved to Canada and became the Vancouver Canadians for the 2000 season, though they retained their affiliation with Oakland until last year when they signed a new affiliation agreement with the Toronto Blue Jays. The team plays in the short-season Single-A Northwest League, where it is often the first stop for players beginning their professional careers.

In 1990, the Oakland Athletics selected four pitchers in the first 36 picks of the amateur draft, and they started their careers with the Southern Oregon A’s. Todd Van Poppel did not garner as much media attention as Stephen Strasburg did two decades later, but I think that was mainly because there wasn’t so much media in 1990. The other three pitchers were Dave Zancanaro, Don Peters and Kirk Dressendorfer. All four had injury issues during their careers; only Van Poppel and Dressendorfer reached the majors and neither became stars.

Managed by Grady Fuson, the Southern Oregon A’s had a 40-36 record in 1990. In addition to Van Poppel and Dressendorfer, five other members of the team would eventually play in the big leagues: catcher Eric Helfand, outfielders Manny Martinez and Ernie Young, and pitchers Todd Revenig and Doug Johns. With the exception of Johns, all have cards in the team set produced by ProCards, Inc.

The fronts featured posed portrait shots surrounded by a wood grain border. The player’s name, position and team affiliation in included in a plaque design element at the bottom of the card. The backs have basic biographical information printed in black on an orange background. Because most players are first-year pros, their cards do not have statistics. The team set is numbered from 3421-3450, so that it may be considered part of the company’s overall run in 1990. 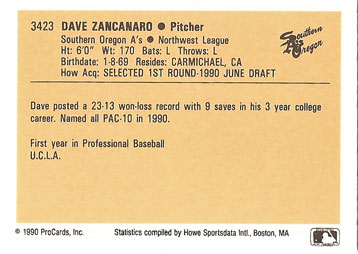 For 50 cents, I enjoyed the trip down memory lane that these cards provided. You can pick up a set for yourself for $6 from Lake Country Minors or $5.95 from STB Sports. It’s an interesting footnote for those of us who remember Todd Van Poppel, and might have some appeal to Oakland A’s fans. However, it’s not something that would have a place in most people’s collections.