It wouldn’t be the off-season without a few minor league baseball teams changing logos, adding mascots, or re-branding themselves in some way.

The former Akron Aeros have shed the moniker they bore for 17 seasons to become the Akron Rubber Ducks in 2014.

“We wanted to do something that was fun and entertaining while honoring the heritage of this great community, ” team owner owner Ken Babby said.

Akron was once known as “The Rubber Capital of the World,” with all of America’s major rubber companies located there in the early 20th century, but I’m not sure where the ducks came from. (Then again, I never knew what an Aero was supposed to be, so from that perspective it’s an improvement.)

I don’t like the new logo – it makes me think “auto racing.”  The old Aeros logo at least did more to suggest it belonged to a baseball team. 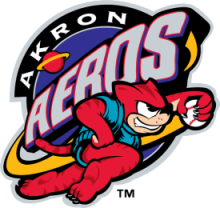 The Altoona Curve announced details of next summer’s two-day 2014 Eastern League All-Star Stop event, which will take place on July 15 & 16, 2014.

The Toronto Blue Jays extended their affiliation agreement with the New Hampshire Fisher Cats through 2016. The two teams have been partners since the 2003 season.

This week, the Trenton Thunder were recognized as Minor League Baseball’s Team of the Year through fan voting conducted on MiLB.com.  They also won an award for Promo of the Year (for the retirement party for Chase, the team’s bat dog) and the Mascot Clip of the Year.

Reading Fightin Phils infielder Maikel Franco was the MiLB.com staff pick as the Breakout Prospect of the Year, and Harrisburg Senators pitcher Richie Mirowski was the fans’ choice for Best Reliever of the Year.