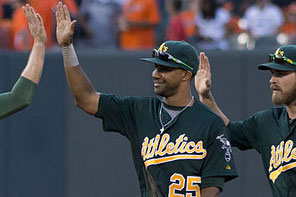 The Mets reportedly agreed to terms with free agent outfielder Chris Young on Friday, their first major league acquisition of the off-season. ESPN reported that the deal is for one year at $7.25 million and is contingent on Young passing a physical.

I have to admit, my initial reaction was disappointment. There are plenty of things not to like about Young:

But further consideration, there are reasons to like the signing.

On the bright side, Young will be 30 next season and he was an All-Star in 2010 when he hit .257 / .341  / .452 with 27 home runs and 28 stolen bases. According to Baseball Reference’s calculations, Young had back-to-back seasons where he was worth 5.0 WAR or better, and he’s never been worse than the mythical “replacement level player” that the stat uses to compare value.

And getting away from numbers, it should be really fun to see Young and Juan Lagares playing next to each other in the same outfield next year.

As much as I’d like to see the Mets target players who aren’t coming off of terrible seasons, injuries, or both, the reality of their financial situation means that they have to roll the dice.

If they get lucky, Young helps the Mets win a few more games than they otherwise might have and Sandy Alderson can flip him for prospects at the trade deadline or the postseason eligibility deadline, like he did with Marlon Byrd this year.

If the Mets are unlucky, they have a player who will not hurt them all that much and who will go away at the end of the season when his contract expires.

It may not be the most exciting move, but the 2014 Mets are probably a little bit better off for it.

4 thoughts on “Rolling the dice with Chris Young”