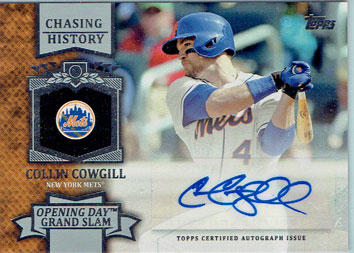 Collect the Mets ended the year with a look at “The Essential” Mets baseball cards from 2013’s 40+ sets. On Tuesday, the Mets autograph cards of 2013 were featured.

2013 was filled with new Mets autographs from the first days of the year all the way to the last.  Add in a few current stars (well, as much as the current team has stars) and loads of former favorites and you’ve got a pretty decent bunch of cards for one year.  Best of all, 2012′s prospect drought didn’t carry over to 2013.  Instead, we were treated to a bountiful prospect crop, so let’s start there.

I was fascinated to see how many different players were featured on autographed cards last year – my collecting interests and budget meant I only acquired a very small percentage of them. Here’s hoping I will be able to add to that number at some point in the future.