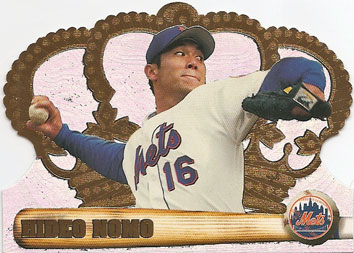 A 123-109 Major League record, a 4.24 career ERA and 1918 strikeouts over 1,976.1 innings didn’t seem like Hall of Fame stats to most members of the Baseball Writers Association of America.

The Players Selection Committee of Japan’s Baseball Hall of Fame felt differently – Nomo became the youngest person to be inducted this week, earning 82.4 percent of the 324 votes.

Nomo’s baseball career is really about more than numbers. He was only the second Japanese-born player to appear in a major league game, but unlike Masanori Murakami, Nomo’s early success with the Los Angeles Dodgers paved the way for other Japanese stars to test their skills against the best baseball players in the world.

And for a couple of years, Nomo was a phenomenon.

Do two amazing seasons and a role as a baseball pioneer merit a plaque in Cooperstown? I honestly don’t know, but I thought they might be worth a little more than six votes.

It will be up to the Historical Overview Committee and the Expansion Era Committee to determine if Nomo deserves to be a member of the National Baseball Hall of Fame, but I’m glad he was recognized somewhere for his contributions to the game.