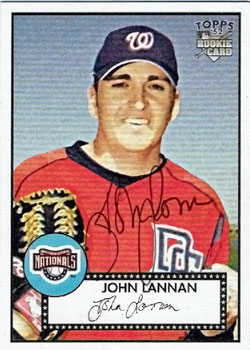 Lannan, 29, is expected to compete with Jenrry Mejia for the fifth spot in the starting rotation and allow prospects like Rafael Montero and Jacob deGrom more time to develop in the minor leagues.

I like Lannan – he pitches fast and gets ground balls, so he’s basically the anti-Daisuke Matsuzka.

However, Lannan had a bad year in 2013. Two separate trips to the disabled list with a knee injury limited him to just 85.1 innings last year, and he did not enjoy a lot of success with the Phillies when he was able to take the mound.

Sandy Alderson seems to have learned a lesson from his experiences with Shaun Marcum and Chris Young – Lannan has a minor league deal and will have to earn his way onto the major league roster. It seems like a nice low risk, moderate reward signing to me.

The Mets also brought back Omar Quintanilla on a minor league deal, which seems like a signal that Ruben Tejada will open the year as the starting shortstop. With Justin Turner non-tendered, the only other player on the Mets’ roster with shortstop experience is Wilfredo Tovar. Quintanilla is likely to either win the backup role outright so Tovar can get regular playing time in Triple-A, or compete with Tovar for that roster spot.

If someone like Stephen Drew was a realistic option to take the starting job away from Tejada, there’d be no need for Quintanilla – which was probably the reason he was non-tendered earlier this off-season. I really would have liked the Mets to spend the money on Drew since they don’t have any legitimate shortstop prospects in the upper minors, but Alderson can only work with the budget he’s given.