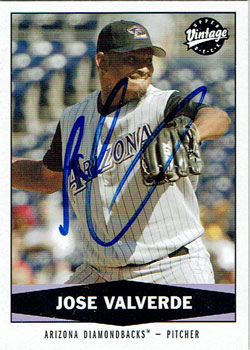 On Wednesday, the New York Mets announced that they had signed former Detroit Tigers and Arizona Diamondbacks closer Jose Valverde to a minor league contract and invited him to spring training.

Valverde, who will be 36 on opening day, was an All-Star as recently as 2011. However, after he failed spectacularly in the 2012 playoffs, the Detroit Tigers were reluctant to bring Valverde back in 2013 and he appeared in just 20 major league games.

I’m not a big fan of “Papa Grande,” but the signing is a gamble with limited risk. If Valverde pitches better than the Mets’ other options, he’ll make the major league bullpen and have a chance to be this year’s LaTroy Hawkins. If not, he’ll be pitching in Las Vegas or heading home.

Valverde joins former Chicago Cubs reliever Kyle Farnsworth, who the Mets signed last week, in this year’s bullpen competition. Like Valverde, Farnsworth last enjoyed big league success in 2011. Again, if he works out, Farnsworth can help the Mets’ bullpen and if he doesn’t, he’ll spend the season in Las Vegas or at home.

The only real danger is that Valverde or Farnsworth become the 2014 version of Brandon Lyon (who signed a minor league deal with the Los Angels Angels of Anaheim this week. Go figure.)

There was one other minor news item on Wednesday, which I suppose a few people (somewhere) may have missed. New York Yankees captain Derek Jeter announced that he will retire at the end of the 2014 season. While I want Jeter’s farewell tour to go better than his injury-plagued 2013 season, I hope that the Mets respect the wishes of a significant portion of their fans and forgo any kind of tribute when the Yankees visit Citi Field on May 14th and 15th.