This year’s Topps sticker collection came out a few weeks ago, but I have to say that I’m not interested enough to track down the nine Mets on the checklist, much less try to complete the full set. 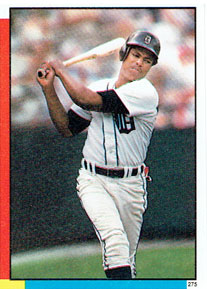 1990 Howard Johnson Topps sticker back card and Lou Whitaker sticker (If you see images with rounded corners, it’s my blog theme at work – the actual card has standard 90-degree corners.)

When I was younger, though, it was a different story. If sticker collecting didn’t immediately grab you, Topps tried to lure collectors in with baseball cards printed on the back of the stickers for a few years. I’m not sure how well the experiment worked on a large level, but it did give me extra motivation to buy the packs of stickers/cards.

The sticker cards set was easier to complete than the stickers, provided that you didn’t try to obtain every possible variation. In 1990, there were 67 different sticker back cards, but 328 stickers. The card set was evenly divided between National League (with blue backgrounds) and American League players (with red backgrounds). The final card was a checklist.

For those who don’t remember Howard Johnson, he was a member of the 1986 World Series Championship New York Mets team, a three-time 30-30 player (30 home runs and 30 stolen bases in the same season), led the National League with 38 home runs in 1991, and finished in the top 10 in MVP voting three times. Although Johnson was primarily a third baseman, he also started games at shortstop and all three outfield positions during his Mets’ career.

Johnson has been a major league coach and minor league manager since his retirement. He is currently the hitting coach for the Seattle Mariners.