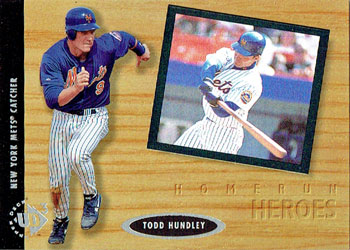 Geof surprised me with a couple of envelopes filled with Mets baseball cards this week. Here are a few of my favorites and some that just caught my eye.

I had just gotten back into baseball card collecting in 2002, so I really don’t remember whether “Heroes of Baseball” was a full set released by Upper Deck that year or just the name of this insert series. This card, #HTS3, commemorates the April 22, 1970 game when he struck out the last 10 batters en route to a 19-strikeout performance.

Mets fans of a certain age undoubtedly remember that game. Younger fans might remember hearing about it during a Mets broadcast – particularly during the era that Seaver was a TV analyst for the Mets, it seemed to come up quite often.

I was not actively collecting baseball cards in 1997, but this might have been a favorite card design if I was. I remember early-career Todd Hundley better than the All-Star. For his first five seasons in the majors, Hundley was a good defensive catcher who hit the occasional home run but struggled to keep his batting average significantly above his weight. That all changed in 1996, when Hundley set a Mets team record for home runs in a season and an MLB record for most home runs in a season by a catcher with 41. (It was little surprise when Hundley was implicated in the Mitchell report.)

There are a lot of wacky 1990s baseball cards, particularly when you get into the insert sets. This one is very understated, with just a rainbow foil effect to Gooden’s nickname making in stand out from regular base cards. I remember dealers asking $2 or $3 for it back in 1993 – now, I imagine it would land in the quarter box if a dealer felt that it was worth bothering with. I’m happy to find a card that evokes memories, though.

In 2001, Upper Deck released a set of baseball cards focusing on the “Legends of New York,” stars from the Mets, Yankees, New York Giants and Brooklyn Dodgers. To the best of my knowledge, this is the only set that ever featured flocked logos on the baseball cards. I wasn’t actively collecting at the time, but I believe I’ve picked up all of the Mets cards at some point (as well as a handful of the Giants and Dodgers cards.)

I’d love to know what kind of reaction the Legends of New York set received outside of this area, assuming that it truly was a nationally-released set.

Gary Carter’s arrival in New York more or less coincided with me reaching an age to recognize and choose a favorite baseball player. His constant enthusiasm (and presence in front of the cameras) made him my obvious choice. I have every nationally-issued baseball card produced during Gary Carter’s career, as well as an awful lot of regional ones and post-retirement issues.

I give Panini points for card design – last year’s Hometown Heroes set has a nice retro feel to it without being totally derivative of anything I’m familiar with. But no matter how nice the card design, I still can’t get past the fact that they don’t have a license to use Major League Baseball team names and logos. (Color combinations are also a problem, apparently – orange lettering and trim gets turned white on Mets cards.

This year’s Donruss set also gets points for a cool retro design, with elements reminiscent of the company’s 1987 sets along with the early 1980s logo. But that is an awful photo of Wilmer Flores, who has been digitally manipulated into a generic non-Mets uniform. (To be fair, I think I like the generic look for Wilmer… right now, he looks like he might turn out to be one of those players who is too good for Triple-A but not good enough to stick in the majors.)

I can still remember being excited about getting to go to Ike Davis’ major league debut. He was supposed to be a fixture at first base for years, with the potential to become a star. That summer, I spent too much money on a Steiner-certified autographed photo because it was from that debut game. That winter, I waited on line for hours to “meet” Davis and get his autograph in person at a bank opening. He seemed like a very friendly guy that you wanted to see do well.

It didn’t work out in New York, and it doesn’t look like things are going much better in Pittsburgh. Here’s hoping Davis can turn things around next season (just not when he’s playing against the Mets.)