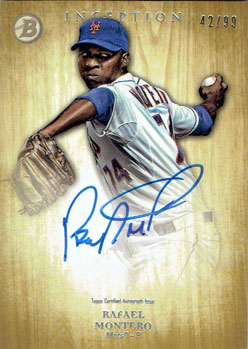 The real New York Mets news is that the team is being sued by a former executive who alleges that she was harassed by chief operating officer Jeff Wilpon because she was unmarried and pregnant.

And at least one blogger wants to focus on what kind of caps Mets players will wear during tonight’s game.

It’s too bad, because the team on the field is actually kind of fun to watch again.

Rafael Montero finally earned his first major league win last night as the Mets completed a series sweep of the Colorado Rockies. Don’t look now, but the Mets are only four games under .500 are 5.5 games behind in the wild card race.

If they can figure out how to beat the Washington Nationals this weekend, the Mets will have a good chance to finish the year with a winning record. As it is, the Mets are almost guaranteed to improve upon the 74-88 mark that they’ve finished with in each of the last two seasons.

I picked up Montero’s autograph in a trade earlier this summer – I now have signed baseball cards for at least 886 of the 984 players who have appeared in at least one game for the New York Mets. I’ve only been able to make a few additions to my collection in 2014, but with luck I’ll at least manage to track down a few more signatures of the recent Mets in the near future.