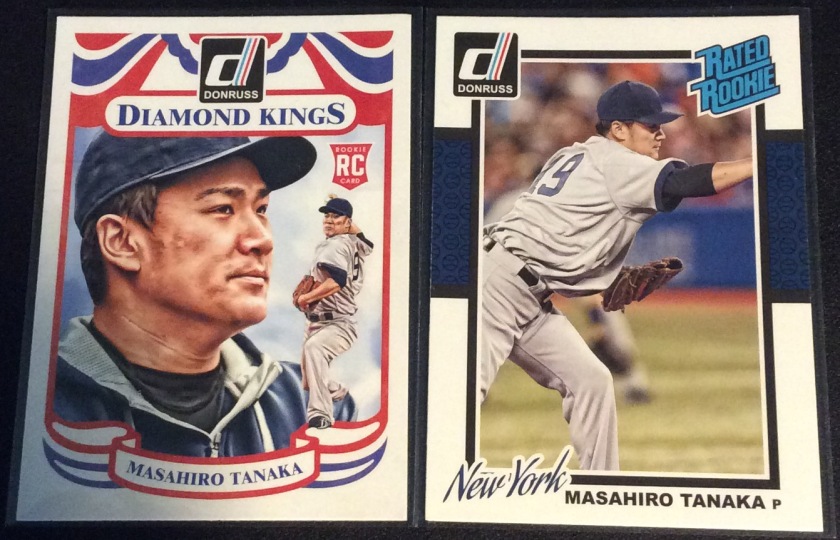 I may not have found any Topps Update packs yet, but I did get to open some baseball cards last week. One of my friends gave me a couple of packs of Donruss Series 2, and I have to admit that the set is growing on me.

I did pretty well – I ended up pulling Travis d’Arnaud, the only Mets player in the 100-card base set.

I also found Masahiro Tanaka‘s Rated Rookies and Diamond Kings cards – in the same pack. I normally don’t get that excited about Yankees cards, but I really enjoyed watching Tanaka pitch this year and these are his first baseball cards that have landed in my hands. Panini’s lack of a license to show Major League Baseball logos hurts the Rated Rookies card, but the Diamond Kings card works for me.

There was a pair of Derek Jeter cards in that Yankee-centric pack, which I note because it’s likely the last time I will pull a Jeter card from a “new” set that was produced during his playing career. Again, I really like the Studio insert (there’s a brand Panini could revive and I’d probably want to collect it – the lack of an MLB license really doesn’t hurt the theme.)

And since we’re waiting for the Wild Card World Series to start up next week, how about some Kansas City Royals and a San Francisco Giant?

Finally, a “hit” that might interest an Arizona Diamondbacks or Mike Trumbo collector: a Diamond Kings Press Proof, #198/199. (If you want it, leave me a comment and it’s yours for any card from my wantlists or any 2014 Mets baseball card.)