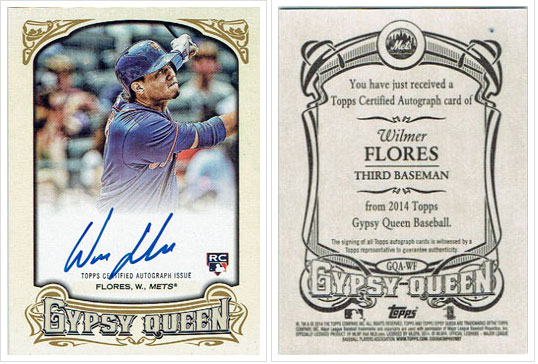 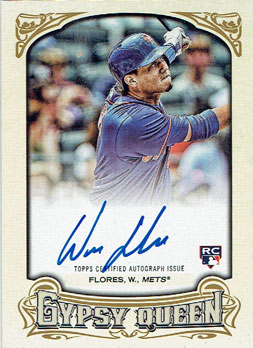 Wilmer Flores may or may not be the Mets’ Opening Day shortstop in 2015, but he showed flashes of promise at the end of this season.

Although Flores had been a hyped prospect for a number of years, I didn’t have any luck getting his autograph at the ballpark when he was playing in Double-A and I wasn’t particularly interested in paying for his Bowman and Donruss certified autographs before his major league debut.

Fortunately for me, this Topps and Panini both chose to included Flores on the autograph checklist for a number of products this year. I was able to get this one from 2014 Gypsy Queen Baseball for $2.50 shipped from an eBay seller – a bargain for me, but a disappointment to anyone who pulled a copy out of their $125 hobby box.

The autograph appears on the card, not a sticker, which is a positive. I’m also a fan of the tobacco card era-inspired design, but I know that Gypsy Queen Baseball’s charms are wearing thin for a number of collectors.

By my latest count, Wilmer Flores’ autographed baseball card is the 889th Mets player’s in my collection, representing over 90 percent of the team’s all-time roster. I’d like to reach 900 by Opening Day, but I don’t know how realistic that is.