Topps Stadium Club has been one of my favorite sets since its first year, way back in 1991. It’s the one set that I wish Topps could get “right” again. I don’t think this year’s release is quite “there” yet, but I hope it does well enough to stay on the Topps release calendar for 2015.

The base card design would fit in with any of the sets released late in the brand’s original run, and the photography – Stadium Club’s hallmark – remains impressive. On the down side, the set is too small to include a full representation of any team – the sets I loved had over 600 cards, while in 2014 the set is made up of just 200 cards. And I’m not sure there’s enough “bang for your buck” to satisfy people who are buying Stadium Club by the box instead of picking up the singles they want from casebreakers.

Here’s a look at the Mets’  base cards and select inserts: 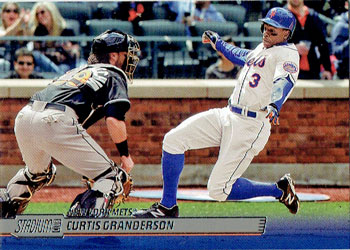 I can’t tell for sure if the Jarrod Saltalamacchia had the ball, but Curtis Granderson had to be out on this play if he did.

Travis d’Arnuad gets a posed shot holding a bat while sitting in the dugout. It’s cool because we don’t see this kind of photo very often in 21st century baseball card sets.

Generic 2013 action photo for Zack Wheeler… at least he’s smiling in the one on the back of his card.

David Wright, sticking out his tongue while completing a throw. 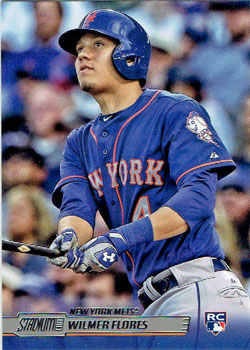 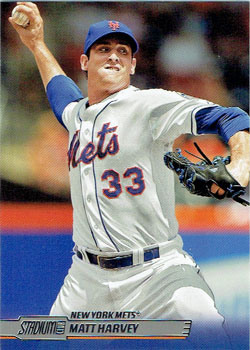 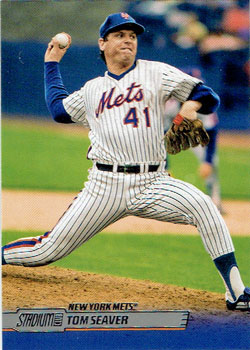 Tom Seaver is the greatest player to wear a Mets uniform, but he does not belong in a 200-card set issued in 2014. Those spots should be filled by current ballplayers. But points for using a photo from 1983 – I don’t often see images of Seaver in the racing stripe uniforms.

I think the Beam Team cards look a little more impressive after being scanned than they do in person. Unfortunately, this one uses another 2013 photo.

And let’s end with my favorite card from this year’s set – I love good candid photos of players in the dugout.

What do you think of this year’s Topps Stadium Club set?