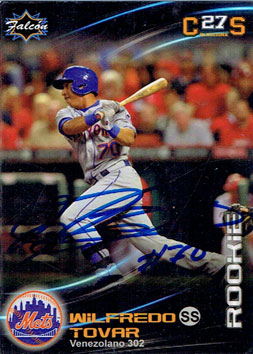 First up, we have a Venezuelan baseball card of New York Mets infielder Wilfredo Tovar that I found on eBay. Aside from learning that Falcon and C27S (ColeccioneS 27) is a manufacturer of baseball and soccer cards in Venezuela, I haven’t been able to find out anything about it.

Tovar, 23, is an infielder who received late September call ups from the Mets in each of the last two seasons when injuries created late-season depth issues. He’s been in nine major league games even though he has not played above the Double-A level in the minor leagues. (In case you’re wondering, Tovar did appear on a two-player Topps Heritage rookie card this year, but the Venezuelan card may have been his first appearance on cardboard in a non-digitally altered Mets uniform.)

Next we’ve got two cards from my grand prize package from the “Almost the Easiest World Series Contest on the Web”:

Anderson Hernandez was a light-hitting shortstop with a decent glove. He appeared in 240 games between 2005 and 2010 with the New York Mets, Washington Nationals, Cleveland Indians and Houston Astros. He was still playing in the Mexican League as late as 2013. This card is a certified autograph from Upper Deck’s 2006 SPx set.

Steve Holm was a catcher who appeared in 59 games between 2008 and 2011 with the San Francisco Giants and Minnesota Twins. He was still playing minor league baseball as late as 2012. This card was an Inkredible insert in Upper Deck’s 2009 Series 2 set.

Finally, we’ve got a pair of signed cards from a through-the-mail request:

John Rutherford is one of a few dozen surviving players who can say they were Brooklyn Dodgers. The 89-year-old Rutherford went 7-7 with a 4.25 ERA as a starter and reliever for the 1952 Brooklyn team that lost to the Yankees in the World Series. He pitched the bottom of the eighth inning of game four, which was watched by 71,787 at Yankee Stadium.

Rutherford was in the mood to spread some early Christmas cheer, sending me a signed 1995 Topps Archives card as well as signing the Autograph Card I had mailed to him.

Looking forward to spring days
Final #Lego minifigure acquisitions of 2021...Scarlet Witch and the new Captain America are a couple of my favorites of the year #MCU #Avengers #WandaVision #Loki #thefalconandthewintersoldier #PepperPotts
Putting together a few things on #LegoBuildDay
Hoping everyone had a happy Christmas 🎅
On the 23rd day of December, Thor & Draco each brought Christmas trees to the #Lego Christmas party #Avengers #StarWars #HarryPotter