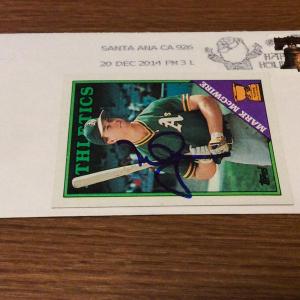 I found a surprise waiting for me in Friday’s mail – a signed Mark McGwire 1988 Topps card. When McGwire joined the Los Angeles Dodgers as their new hitting coach for the 2013 season, I mailed this card (one of my favorites of the late 1980s) to him and asked for an autograph. I didn’t really expect to see it again, but it wasn’t a big risk – I must have at least a dozen more.

Well, almost two years later, I have my autograph. And if it’s the last one I add to my collection in 2014, it’s a fine way to end the year.

Most people can’t look at McGwire without seeing a cheater who used steroids, and they’re not wrong.

But I also remember the 1998 home run race between McGwire and Sammy Sosa that captured national attention, even though I wasn’t really paying much attention to baseball that summer. (I was too busy graduating college and figuring out what came next.)

And I remember the young Oakland Athletics slugger who hit 49 home runs in his rookie season and was half of Oakland’s “Bash Brothers” with Jose Canseco. I loved watching their home runs on sports highlights shows long before any of us were really thinking about steroids in baseball.

McGwire will never earn a place in Cooperstown, and I won’t  argue that he belongs there. But he definitely does belong in my collection, and his autograph joins Clayton Kershaw‘s as one of my favorites that I got through the mail in 2014.