Back in December, Bowman released its annual Draft set with cards of some of the top selections in the 2014 First Year Player Draft.

If not for a certain generous blogger posting about the Asian version of this set, I think I would have forgotten about it. And really, except for some of our first Michael Conforto baseball cards showing him in a New York Mets’ uniform, I wouldn’t have missed out on much that fits into my collection themes.

There are four Mets in the base set, two draft picks and two prospects. There are a rainbow of parallels for both the standard and Chrome versions… check The Cardboard Connection for details. 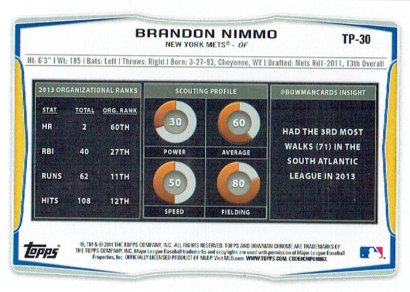 The back of Brandon Nimmo’s 2014 Bowman Draft baseball card

The back of Dominic Smith’s 2014 Bowman Draft baseball card

Is Michael Conforto the answer to the Mets’ offensive woes?

The back of Michael Conforto’s 2014 Bowman Draft baseball card 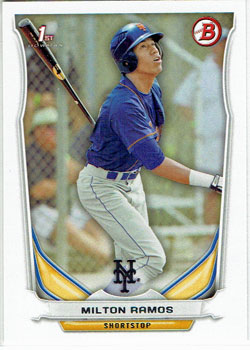 The back of Wilton Ramos’ 2014 Bowman Draft baseball card 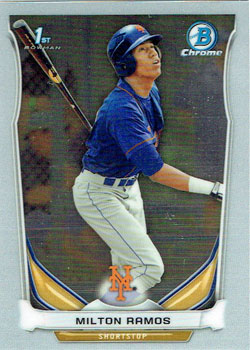 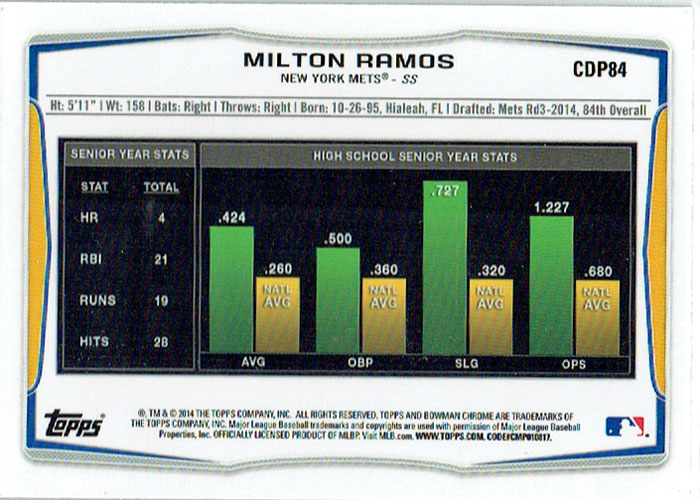 The back of Wilton Ramos’ 2014 Bowman Chrome Draft baseball card

The “1989 Bowman Is Back” insert set continues in this Bowman product. These are some of my favorite cards from last year because they have a nostalgia factor for me, but they have been updated enough to feel different and to fit in with a modern set. Two Mets prospects are featured in this 25-card series:

Michael Conforto is also featured in the 35-card Bowman Initiation insert set, with individual cards serial numbered to 99. With the eBay average selling price hovering near $11 when I researched this checklist, I don’t think I’ll bother pursuing this one.

Two Mets are included in the 35-card Bowman Scouts’ Breakouts insert set, which has die-cut and a serial numbered X-fractor die-cut parallels.

The common versions are only going for around $1 and neither player appears elsewhere in the Bowman Draft checklist, so I’ll probably try to pick them up at some point.

Michael Conforto also appears in the 10-card Dual Draftees insert set. With card prices under $1 on eBay, I have little reason to skip it… except that I don’t really like the card design or dual player cards that feature random pairings.

Future of the Franchise

Finally, the Mets’ first round pick in the 2013 draft, Dominic Smith, appears in the 30-card Future of the Franchise Mini Chrome insert set. While there are rarer parallels, the basic insert card can be had for around $1 so I may try to pick it up later.