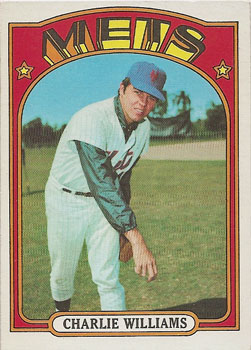 We almost made it through January, but this week we lost two members of the New York Mets alumni family. As I noted on Wednesday, Bill Monbouquette passed away on Sunday.

And now we get word that 1970s pitcher Charlie Williams died Tuesday as the result of complications following surgery. Greg Prince wrote about the man Mets traded for Willie Mays in 1972, and I’d urge you all to read it.

(If today’s social media forums were around in 1972, I wonder what the reaction would have been to trading a talented home-grown pitcher who was born in Flushing for an aging superstar.)

Williams continued to receive autograph requests in the mail right up until the end of his life, his brother-in-law told New York Times reporter Patrick McGeehan. “It was a regular thing for a long time,” he said. “People would want to complete their collections.”

(Interesting enough, SportsCollectors.Net shows collectors who wrote to Williams and recorded their results had an 0-for-16 success rate over the years.)