I have dozens of collectible Pop! vinyl figures… they are well on their way to becoming the Beanie Babies of this decade. Funko has made figures for just about every license you  could imagine… and quite a few that you probably wouldn’t.

Until today, I did not have any of the baseball ones. Thanks to my friend Greg, I’m able to cross Mr. Met off of my wishlist. 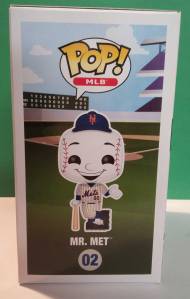 Last year, Funko released a series of seven Major League Baseball mascots. As you see with Mr. Met, the figures aren’t meant to be 100% on model reproductions… instead, they are stylized using the distinct Pop! look with button-like eyes. I don’t think they sold very well compared to Funko’s other Pop! lines. They are not currently being produced, but you can still find them at or near retail price if you look around a bit on eBay or from Amazon Marketplace sellers.

Thanks Greg… maybe Mr. Met will bring some luck for the 2016 team.

One thought on “Mr. Met”