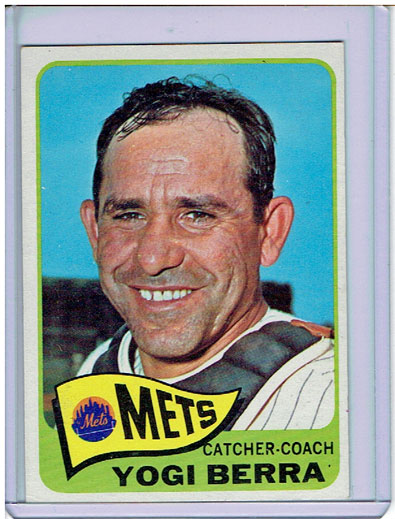 Last fall, my friend Greg found me a number of really cool Yogi Berra baseball cards. This one from 1965 is my favorite because it’s the only one in my collection that was actually produced during Berra’s playing career.

The New York Yankees’ great and future Hall of Famer came to the Mets in 1965 to be a coach, but he found himself on the active roster during the early part of the season.

In the comments section of a post I wrote a couple of weeks ago, one of my readers recalled Berra’s Mets playing tenure:

Yogi was on the active roster from the 27th of April until the 17th of May in 1965. They’d brought him over as a Coach, really, but joked about a battery of Yogi and Warren Spahn throughout spring training. We had plenty of catchers and plenty of outfielders and, thanks to the bonus rules at the time, a full 40 man roster, so it was basically a gag because nobody really foresaw a situation where Yogi would be activated–certainly not at the cost of a promising kid.

When Kevin Collins was injured prior to his anticipated debut on April 25th, they put him on the DL and activated Yogi. What the heck, they weren’t going anywhere anyway. Yogi quickly discovered that his knees couldn’t handle catching anymore and begged out. He never caught Spahn, but caught Al Jackson twice (one win, one loss). He announced his re-retirement on May 12th, the day after the Mets acquired Chuck Hiller from the Giants. Hiller took Yogi’s spot on the roster on the 17th (played his first game for the Mets on the 18th).

We did lose outfielder Bob Nash out of all this. We’d been hiding him on the DL. To put Collins on the DL, we had to pass Nash through waivers. Didn’t work. The Phils snatched him up. As it turns out, Nash never fully recovered anyway.