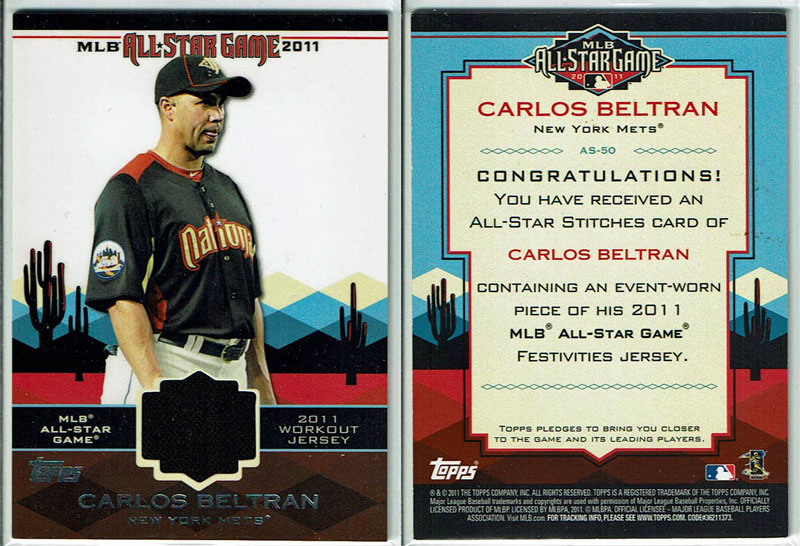 A while ago, Twitchy sent me some really neat Mets baseball cards… and I still haven’t shown any of them off. So let’s fix that.

I love All-Star Game relic cards, despite not being a particularly big fan of relic cards or the All-Star Game. Go figure. I think it’s because it’s fun to see players in uniforms that they don’t normally wear.

In 2011, Carlos Beltran was in his final year as a Met. It seems like a lifetime ago, but it hasn’t even been five years since he represented the Mets in the National League’s 5-1 victory in the All-Star Game at Chase Field. Beltran went 1-for-2, scoring on Prince Fielder‘s home run off of C.J. Wilson. A few weeks later, he was traded to the San Francisco Giants for Zack Wheeler.

In a few hours, Beltran will be trotting out to right field at Yankee Stadium as New York’s other team tries again to get their 2016 season started. On the plus side, it’s not raining today…but it’s not exactly baseball weather – fans might need to worry about frostbite.

It’s too easy for Mets fans to remember Beltran’s career for one playoff at-bat in 2006, but he really was one of the greatest players in team history. Hopefully after he retires, the Mets will honor him with a plaque in the team’s Hall of Fame.

Meanwhile, the Mets will try again this afternoon to get that first win under their belts. Friday’s home opener will be more fun if they aren’t starting the season with an 0-2 record.