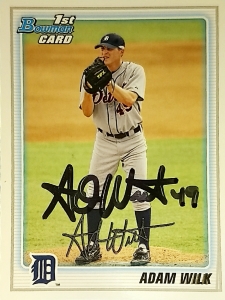 Matt Harvey‘s latest indiscretion paved the way for Adam Wilk to become the 1,028th player in Mets’ history.  Unfortunately, while Wilk showed up for work, he didn’t have a very good day: six runs in less than four innings, including two home runs to Giancarlo Stanton probably means a return trip to Las Vegas is in order.

Wilk was kind enough to sign the card I mailed to Mets spring training camp this February. 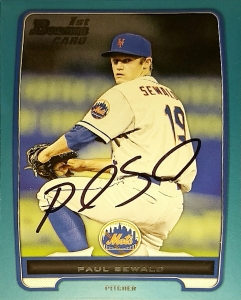 Paul Sewald is the only other player to make his Mets debut thus far in 2017. A minor league closer, Sewald was a relatively unheralded prospect prior to this year.

An impressive spring training and an overtaxed bullpen earned Sewald a promotion in April, but he struggled in his major league debut and was sent back to Las Vegas after just one more appearance.

The Mets’ bullpen workload continued to be heavy, and Sewald got another shot. This time, he’s proving to be a bullpen savior: after pitching two perfect innings to complete Saturday night’s victory, Sewald absorbed 3 1/3 innings in yesterday’s loss.

Sewald was also kind enough to sign the baseball card I mailed to Mets spring training camp in February.

The final addition to my Mets autograph collection since the season started comes courtesy of Geof, a reader of my previous blog and occasional correspondent. 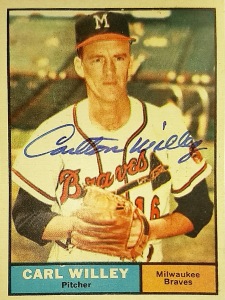 Carl Willey had an eight-year Major League Baseball career, pitching for both the Milwaukee Braves and the New York Mets in the 1950s and early 1960s. He later went on to be a scout for the Philadelphia Phillies.

Willey’s 9-14 record for the 1963 Mets doesn’t seem all that impressive – until you remember that the team only won 51 games that year. Willey pitched four shutouts and had a 3.10 ERA.

The next spring, Willey was the victim of bad luck – he was was struck by a Gates Brown line drive that broke his jaw during an exhibition game.

These three additions give me autographed baseball cards for 931 of the 1,028 players in Mets’ history.