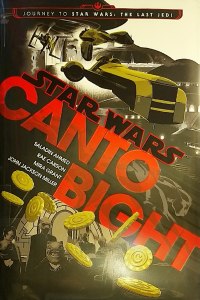 Star Wars: Canto Bight has the honor to be the first book I read in 2018. One of a handful of releases as part of the “Journey to Star Wars: The Last Jedi,” Canto Bight sets out to tell us more about the casino city that is featured in the new Star Wars film.

Thing is, I don’t know how many people care. While I enjoyed Star Wars: The Last Jedi, I liked spending time with the characters we already knew and meeting Rose Tico. I liked the crystal foxes and the porgs. I did not care very much about the new ships and locations Rian Johnson included in his movie, because they just weren’t that important or memorable.

And that’s a shame, because Canto Bight is worth a look. It’s a fun collection of novellas that do explore Johnson’s otherworldly Monte Carlo.

If you’re thinking that these don’t really sound like Star Wars stories, you’d be right. Take away a wookiee here, a mention of Alderaan there and you’d have four stories that could be easily rewritten for any science fiction anthology with a casino theme. But I enjoyed them anyway, particularly Grant’s story about the Grammus sisters.

Canto Bight may never capture the imagination of a generation of fans the way the Mos Eisley cantina or Jabba’s Palace did thirty plus years ago. But that probably has less to do with Canto Bight than it does with Disney – in 2018, we can pretty much count on a new Star Wars movie every year for as long as they make money. The original Star Wars was in theaters for over a year and was one of the first movies a lot of us bought on VHS. We watched it so many times, the cantina couldn’t fail to make an impression. That’s not really the case now.

But if you enjoy short-form fiction, whether you care about Star Wars or not, I think you might like Star Wars: Canto Bight.