Randy Jones is the most accomplished player I’ve featured in the “Autograph of the Day” segment in a while. He won the Cy Young Award in 1976 and was a two-time All-Star. Twice he won 20 or more games in a season. Of course, all that happened with the San Diego Padres.

The photo used on the 1991 Wiz Mets card is not the most flattering one. I’m surprised the Mets publicity department didn’t try for a better headshot back in the 80s. Jones had six or seven other cards picturing him as a member of the Mets from 1981 to 1983, but for whatever reason I didn’t track any of those down.

Jones has an interesting signature, one that sylizes his initials to  a certain extent and omits most of the other letters of his name. He added his uniform #35, which he wore for most of his career. In 1981, though, Jones wore #25 for the Mets. (Ed Lynch had #35.) The following year, Jones reclaimed his preferred number, which saves me from having a card signed with the “wrong” uniform number (something of a pet peeve.) 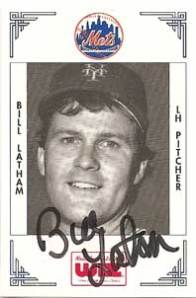 I’m a bit late with today’s autograph of the day post, so I may as well use the card that came in today’s mail.

In 1985, he was a New York Met. He pitched in seven games (making three starts) but managed just a 1-3 record with a 3.97 ERA. During that off-season, he was part of a package of players traded to the Minnesota Twins for Tim Teufel.

Latham’s Minnesota career also lasted just seven games (two starts) in 1986. He went 2-2 with a 7.71 ERA, which I assume was the result of one bad outing, though I didn’t check the box scores.

He signed a 1991 Wiz Mets card that I mailed to him, and he’s got a pretty nice signature for a lefty. He never appeared on a regular-issue Major League card, though he does have a variety of minor league issues from his playing and coaching days as well as a few other team issues.

The rain that messed up last night’s World Series game in Philadelphia got to me around midnight, and managed to make today a pretty miserable day.

Due to some sort of blockage of the storm sewers near my street, my basement flooded today. At the high point, it looked like somewhere between four and six inches of water – not a pleasant sight. The storm sewer has since been unblocked, and the worst of the water has been pumped out. It’s going to take a while to clean up all the mess.

In comparison, the couple of ink spots on the border of the John Pacella card that came in today’s mail really aren’t a big deal at all.

Pro Tip: use ballpoint pens when addressing envelopes, SASEs or writing letters. Unlike fancy gel or felt-tip pens, ballpoint ink doesn’t run when a drop of water lands on it. 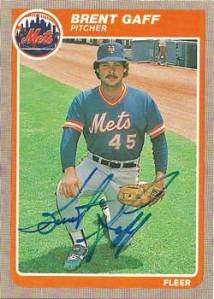 The mail came early today and included a couple more cards for my Mets autograph collection.

This 1985 Fleer card signed by Brent Gaff was purchased on eBay from scottdfran. It was once part of a nearly complete signed 1985 Fleer set that he broke up last week. This week’s set is 1986 Fleer, and I’m hoping to win the Ronn Reynolds card for my collection.

Joe Hicks signed a 1991 Wiz Mets card that I’d mailed to him earlier this month. Hicks spent parts of five seasons in the big leagues, though he was never a starter. He played for the Chicago White Sox and Washington Senators before finishing his career with the Mets in 1963. He finished with lifetime .221 batting average with 12 home runs and 39 RBIs in 416 at-bats.

I got another card in the mail today, this one from former catcher Bob “Hawk” Taylor.

Taylor was a backup catcher and utility player in the early sixites. He played reasonable well for a terrible Mets squad from 1964-1967. He had the distinction of hitting the first pinch-hit grand slam in team history in 1966.

This is another card from the 1991 Wiz Mets stadium giveaway set. To celebrate the team’s 30th anniversary, the Mets distributed perforated sheets of odd-sized (2″ x 3″) baseball cards featuring black and white portrait photos of every player in team history. In quite a few cases, these are the only cards that picture a particular player as a Met. There may be a few cases were the Wiz Mets card is the only one a player had.