Continuing to look at my recently-purchased autographs, today we have New York Mets’ prospect Robert Gsellman. This baseball card, from one of Bowman’s 2014 sets, cost me $2.74 and was my most expensive purchase of the group.

Gsellman, 22, was a 13th round selection out of Westchester High School (Los Angeles, Calif.) in 2011. He split the 2015 season between the Single-A St. Lucie Mets and the Double-A Binghamton Mets. Gsellman was honored as the Mets’ Sterling Organizational Pitcher of the Year and was also a Florida State League midseason All-Star last season.

Unfortunately, Gsellman struggled a bit once he moved up to the Eastern League, where he posted a 7-7 record with at 3.51 ERA in 16 starts. Those are not bad numbers by any means, but he saw his strikeouts per nine innings dip to 4.8 and his strikeout/walk rate fall to 1.88.

I wouldn’t be surprised if Gsellman opened the 2016 season in Binghamton again, but following last season’s deadline trades and the ascension of Steven Matz to the major league level, Gsellman is the best starting pitcher prospect the Mets have in the upper levels of their farm system. 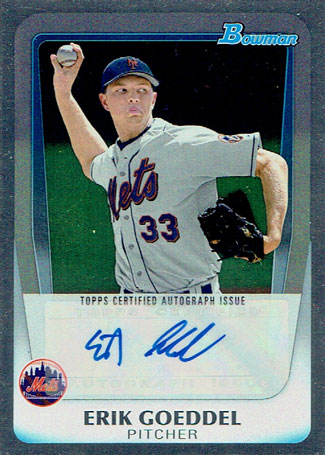 I added four signed baseball cards to my All-Time Mets autograph collection this week, bringing my total to 918 of the 1,007 men who have appeared in at least one game for the New York Mets.

Erik Goeddel is the only one of the four who is an actual, current Mets player, so I’m going to feature his card first. This Topps-certified autograph from the 2011 Bowman set for $2.54 at COMC.com.

END_OF_DOCUMENT_TOKEN_TO_BE_REPLACED 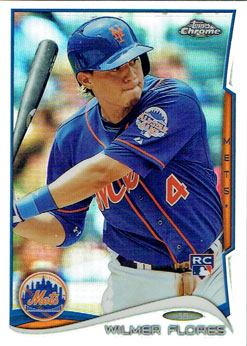 I haven’t bought any baseball cards in the last month, but Brian from Play at the Plate made sure I’d have at least a representation of the Mets in this year’s Bowman set for my collection.

END_OF_DOCUMENT_TOKEN_TO_BE_REPLACED 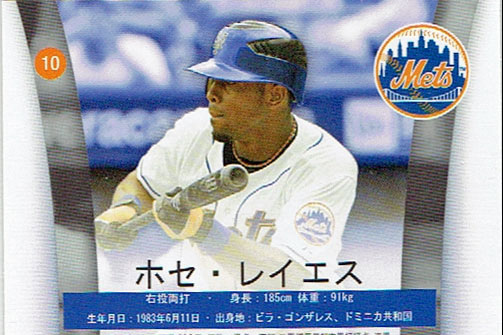 I have a number of Japanese baseball cards in my collection. Most feature Japanese players who signed with the Mets or North American players who went on to play in the Atlantic League.

Until recently, I didn’t have any Japanese baseball cards of Major League Baseball players… it just never occurred to me to look for them.

Earlier this month, Kenny posted scans of some cards he picked up during a recent trip to Japan (link potentially NSFW due to scans of bikini model cards) at his blog, Torren’ Up Cards.

Among the baseball cards were some produced by Upper Deck for Kelloggs in 2008, and I noticed a partially obscured Jose Reyes card in the image. I left a comment hoping to get a better look at it in a future post, and before you know it Kenny sent me a copy for my own collection.

According to Kenny, the back of the Reyes card says: “Represented the Dominican Republic in the 2006 World Baseball Classic, had a .300 average, 19 HRs & 81 RBI in the regular season which were all career highs. For three consecutive seasons, in 2005, 2006 & 2007, he led the league in stolen bases.”

(I’m not sure how you’re seeing the images above, but the Kelloggs card does have traditional square corners.)

END_OF_DOCUMENT_TOKEN_TO_BE_REPLACED

Until this month, I had more or less been ready to write Wilmer Flores off. But in September, he’s beginning to look like a player who should be part of the Mets’ plans for the future.

Last night, the 23-year-old had the best game of his young career – a three-for-four performance at the plate, with two home runs, three runs scored and six RBI.

So it seems fitting to show off the sparkly “1989 Bowman Is Back” insert card I got this week as part of a lot I won on Listia. As I mentioned back in June, I think this insert series is one of the best parts of the 2014 Bowman set – they bring back good memories from the summer of 1989.