We got a hint of early spring weather this weekend, and the Queens Baseball Convention brought us a taste baseball. Current Mets Brandon Nimmo and Chris Flexen and former Met star Todd Hundley told stories about their careers and signed autographs for a couple hundred fans who packed the Katch Astoria on Saturday.

I really want to compliment the event organizers for putting together a fun event that allowed us to celebrate being Mets fans for an afternoon. Flexen and especially Nimmo made new fans with their humble and genuine natures, and Hundley told some great stories about his playing days, like the time Gary Carter stole a base against him or how Hundley thought he’d been traded when he got the news he’d gotten his first MLB callup.  (In 25+ years, Hundley is the first Mets player I remember saying that Eddie Murray helped him to be a better hitter.)

I hope Wright is able to leave the game on his own terms. He says that he’s listening to his doctors and will walk away if they tell him that continuing to try to play will harm his long-term health, and that’s the only reason I’d want him to give up on his comeback attempt.

I’d be happy to have Colon back on a minor league deal, if he’s willing to go to Las Vegas as an insurance policy if one of the Mets’ starters gets hurt or underperforms. But at age 44, Colon is as much of a lottery ticket as Matt Harvey, Steven Matz and Zack Wheeler, only with a much lower upside. So if Colon needs a major league guarantee, I’d pass.

Tebow has played better than I would have expected and I’ve heard a number of stories about how good he’s been interacting with fans. But by the same token, he’s a 30-year-old Single-A player who can only be counted as a prospect by the most charitable definition. So what kind of message does this to the organizational veterans in the Mets’ minor league system? Probably not a good one.

Here are the Mets free shirt Friday designs for 2018 pic.twitter.com/3xjaxm0zaE

The Mets are getting better with the “Free Shirt Friday” designs, although there are still some clunkers. At the QBC we learned that Marvel is designing the TBD shirt… odds are it will be Thor-related, but given the weekend I think a David Wright Captain America design could be fun too.

The 2018 Queens Baseball Convention is happening next Saturday, January 20th.

Developed as a fan-run fanfest for the New York Mets, the QBC offers us a chance to get excited about baseball again during a long, cold winter.

Current Mets players Brandon Nimmo and Chris Flexen, and former Mets star Todd Hundley will be holding panels and signing autographs. Mr. Met will also be making an appearance. Gary Apple and Jon Harper will host a live (non-televised) version of SNY’s Hot Stove show. There will also be vendors and more.

I’m planning to spend next Saturday at Katch Astoria. There are still a limited number of tickets available at www.queensbaseballconvention.com. If you see me there, please say hi.

Each Florida State League team had a pair of prospects featured. Outfielder Brandon Nimmo and pitcher Steven Matz represented the Mets organization. Nimmo is a name we might talk about in Feburary and March if the Mets don’t re-sign Yoenis Cespedes this winter. Otherwise, it’s hard to see how he could fit into the major league outfield picture before next September.

Matz, on the other hand, is already an important part of the New York Mets roster. Tonight, he’s going to face the Cincinnati Reds as the Mets start their final road trip. Coming off a 3-6 homestand that was their first losing one of the season, the Mets badly need a good performance from Matz (and the rest of the team.)

Fortunately, the Nationals weren’t able to take too much advantage of those recent Mets losses. And the Dodgers have been playing .500 baseball over their last ten games, so the Mets still have a real shot at home field advantage in the first round of the playoffs.

Nimmo’s caught in an awkward lunge for a ball in his baseball card photo… it’s a break from the posed shots and the standard “action” photos of batters in their stance and pitchers in their set positions that we see on a lot of minor league baseball cards. But it’s also a reminder of how many action shots can make baseball players look goofy.

Matz’s photo is a wonderful glimpse of the world of minor league baseball. If you’ve only been to major league games, it’s probably hard to imagine all those empty seats at the field level of a ballpark. But particularly on school nights in April, May and September, you will see a lot of empty seats at minor league games… even the ones in those first few rows. And it’s really fascinating to be able to hear the umpires make their calls and the bench jockeying that goes on when players and coaches don’t like them.

The St. Lucie Mets uniforms also give you an idea of what New York Mets uniforms could look like if the team decided to make more use of orange. It’s a distinctive look for the farm team, but I’m glad the Mets have mostly stuck with tradition (outside of the turn of the century black uniforms.) 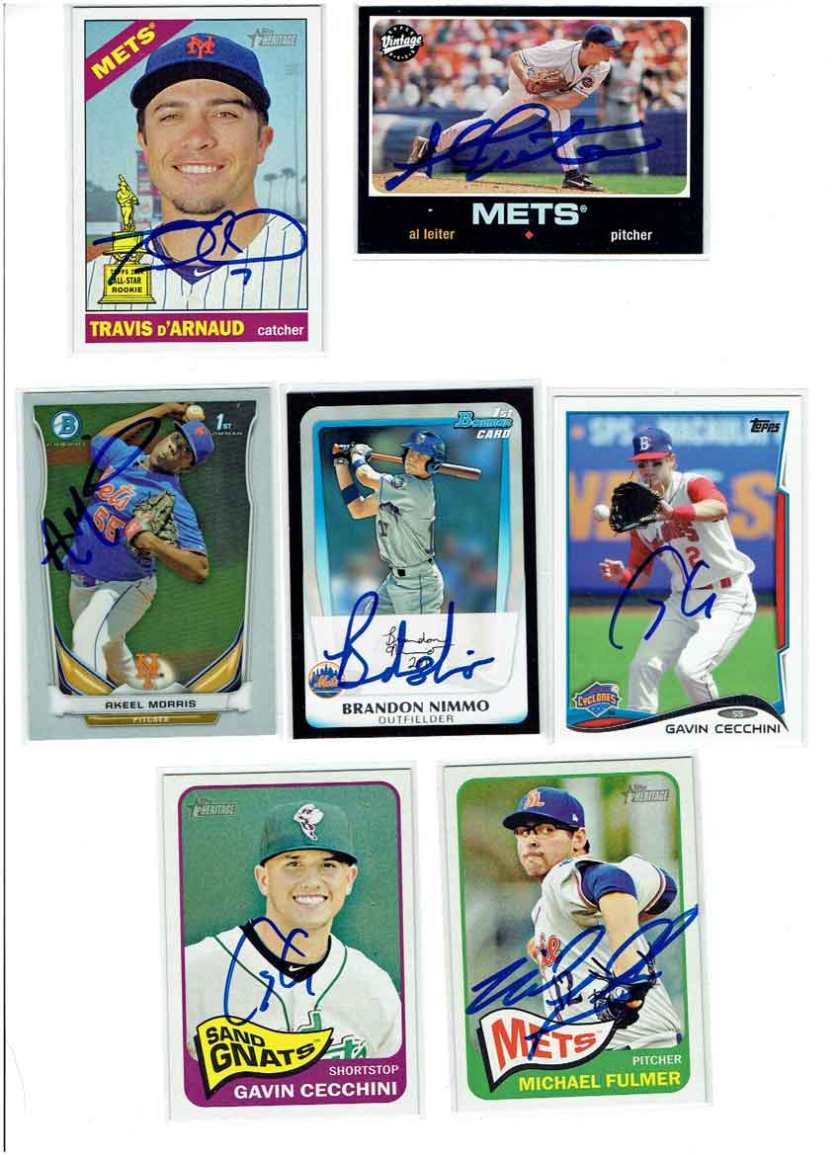 I decided to forgo the chance to see if the Mets could put an end to Zack Greinke‘s scoreless innings streak yesterday (they did) so I could catch the last game of the Binghamton Mets’ only visit to Trenton this season.

The Binghamton Mets did not disappoint, defeating the Baby Bombers 8-0. I even got to see one real Mets player – catcher Travis d’Arnaud, who was playing the second game of a rehab assignment. He was super nice, signing autographs for almost 10 minutes inside the ballpark before the game. After the game, it seemed like at least 100 people were waiting to catch him before he got on the team bus back to Binghamton… and he signed autographs and posed for selfies with everyone who asked.