Professional baseball is returning to Sussex County for the first time since the Sussex Skyhawks suspended operations after the 2010 season.

The new team, which will be known as the Sussex County Miners, announced today that Steve Shirley will be its first manager.

“I wanted someone who had experience in the dugout, who had a good track record and who’d won a championship,” Miners General Manager Dave Chase told New Jersey Herald reporter Carl Barbati.

Shirley has managed the Sioux Falls Canaries in the independent American Association for the last eight years, winning a championship in 2008 and twice earning honors as the league’s manager of the year. In 2014, the Canaries finished with a 33-67 record, the worst in franchise history, and he was let go after the season on Sept. 4.

END_OF_DOCUMENT_TOKEN_TO_BE_REPLACED

The Newark Bears Facebook profile has this message today:

To all… As previously posted, the Newark Bears are undergoing redevelopment phases, ultimately creating a stronger organization. Part of these plans were to evaluate the right league affiliation. Although the Bears will not continue their affiliation w the Canam league during the 2014 season, this should not reflect the status or livelihood of our organization. We will release more information upon taking our next steps towards building ur better & stronger Newark Bears Professional Minor League Baseball team. We thank all of our fans and supporters for being so awesome!! Happy Holidays, Your Newark Bears Family

In a classic move of burying bad news, league officials waited until the afternoon of the Wednesday before Thanksgiving to announce that the Can-Am League will operate as a four-team division of the American Association in 2014.

Quoting from the press release:

Four teams will make up the Can-Am League in 2014: the Quebec Capitales and Trois-Rivieres Aigles from the province of Quebec; the New Jersey (Montclair) Jackals; and the Rockland Boulders of Pomona, N.Y. The Newark Bears will not operate in 2014.

[Canadian-American Association of Professional Baseball commissioner Miles] Wolff commented, “The Can-Am League is extremely pleased to continue its alliance with the American Association. It has been a great rivalry with the teams in the central U.S. and Canada, and we believe it sets the stage for growth of the Can-Am in 2015 and beyond.” The Can-Am League has already announced that Ottawa, Ontario, will join the league in 2015; several other cities are under consideration for inclusion in 2015.

Ever since the Newark Bears dropped out of the Atlantic League, it sort of felt like the writing was on the wall. I’m thankful for friends I made because of the Bears, and many fun nights at Bears & Eagles Riverfront Stadium over the years.

I invite anyone else who enjoyed going to Bears games to share their happy memories, but I don’t want to rehash their failings tonight.

We’re still waiting for the official release of the 2014 Can-Am League schedule, but there’s reason to believe that it will have a different look.

For the past two seasons, the Can-Am League and the American Association have played a number of interleague games because both had an odd number of teams.

With the El Paso Chihuahuas, a Pacific Coast League team affiliated with the San Diego Padres, replacing the El Paso Diablos, the American Association currently has a dozen teams listed on its website. The Diablos are considering a move to Joplin, Mo., but they are hoping taxpayers will fund $5.9 million in stadium upgrades needed to make the move possible. A decision could come at the Dec. 9 city council meeting

If the American Association plays with 12 teams in 2014, it would force the Can-Am League to find a way to operate with an even number. They could add a league-operated road team, as they’ve done in the past. Of course, if they are able to add a sixth team or if they lose one of the current ones, it won’t be an issue.

The Can-Am League is moving away from playing real baseball next year.

The league announced on Friday that it will adopt an extra innings tie breaker rule for 2014, based on existing International Baseball Federation rules.

If games reach the 11th inning, the player in the batting order preceding the innings leadoff hitter will be placed at second base.  Should he score, the run and RBI will count for the team’s offensive stats, but it will not affect the pitcher’s ERA.

In an amazing feat of doublespeak,  Can-Am League commissioner Miles Wolff touted the new rule as an “innovation” while bragging about its popularity in the World Baseball Classic and other international competitions.

You can read the Can-Am League’s press release at the league website. 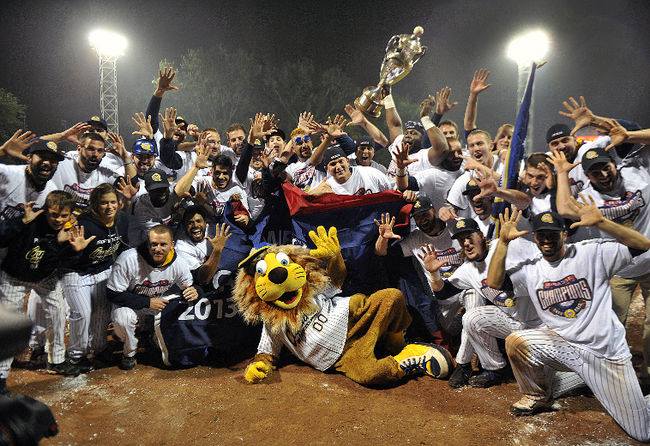 The Quebec Capitales rallied from a four-run deficit to win a 12-7 victory over the New Jersey Jackals to claim their fifth Can-Am League title in as many years on Tuesday night.

Jeff Helps was Quebec’s main run-producer in the series-deciding game. The shortstop was 3-for-4 with a double, four RBI and three runs scored. Boucher was the next most productive Quebec batter, going 3-for-5 with three RBI.

While Helps was certainly the main cog in the Capitales’ offense, Charle Rosario deserves credit for a stellar relief pitching performance. When the right-hander entered the game, Quebec was trailing by four runs. But, Rosario proceeded to pitch 4.2 solid innings and walked away with the win. Rosario surrendered one run on four hits, while striking out five, thus giving the Capitales a chance to mount their comeback.

Pat Scalabrini earned his fourth championship in four seasons as the Captiales’ skipper. In that time, the 2013 Can-Am League Manager of the Year has steered Quebec to a remarkable 20-6 record in postseason play, capped by this game-seven victory over New Jersey. Quebec leads the Can-Am League in championships with six overall.

In the league’s nine years of existence, Quebec has won six titles. None of the other four teams that are currently part of the league have ever won the championship.