Minnie Minoso may be best remembered for appearing in at least one Major League Baseball game in five different decades, but that ignores his skill as a baseball player.

After beginning his career in the Negro Leagues with the New York Cubans, Minoso made his Major League debut with the Cleveland Indians in 1949. In his first full big league season, after being traded to the Chicago White Sox, Minoso was an All-Star and finished second in the Rookie of the Year voting.

During 11 years as a full-time player, Minoso was a seven-time All-Star and won three Gold Gloves. He also finished in the top ten for MVP voting five times.

I got this baseball card, from Minoso’s last full season with the White Sox, signed through a sports card show organized by JP’s Sports & Rock Solid Promotions in 2013. 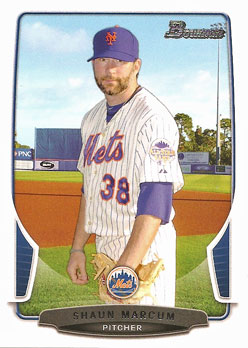 Anthony Young‘s record 0-13 start is safe; Shaun Marcum finally earned his first victory as a Met tonight.  Now Marcum (1-9) can try to catch up with Cole Hamels (2-11 as I write this.)

The Mets offense had to take advantage of some shoddy Chicago White Sox defense to score their runs, and the Mets’ defense made Marcum look better than he really was, but the important thing is that the Mets actually impressed for most of the night. For a while, I had completely stopped looking for that to happen. Yay, progress.

Meanwhile, things seem to be falling apart over in the Bronx.

Yeah, the Yankees shouldn’t matter to me. And mostly, they don’t — but after watching them be the more popular and more successful team for over a decade, I am enjoying watching Cashman find ways to manufacture problems when he already has more than enough unavoidable ones.

One of the nice things about collecting autographs through the mail is the chance of finding a surprise in among the junk mail & bills when you check your mailbox.

It looks like Chicago White Sox pitcher Gavin Floyd has found a box of old fan mail and is trying to catch up with it this offseason.

The day before Thanksgiving, I got an envelope in the mail with a 37-cent stamp and three 3-cent stamps on it, addressed in my handwriting. Inside, a signed Gavin Floyd 2005 Topps Heritage card.

It’s pretty cool of Floyd to spend some time this fall going through old letters, I think.

When I wrote to him, Floyd was a rookie with the Philadelphia Phillies – a team that I really didn’t have much of a reason to dislike yet. The number four overall draft choice of 2001 had pitched in a grand total of seven major league games (he’d make his eighth appearance and suffer his first major league loss the day I mailed my letter.)

Floyd never really found a home with the Phillies, and they packaged him with Gio Gonzalez to acquire Freddy Garcia from Chicago in December 2006. In the American League, Floyd had a 17-8 season for the 2008 White Sox and he’s been a solid starter during his six years there.

Scary how many quality pitchers have come through Philadelphia in recent years, isn’t it?

I know a lot of people are still enjoying a three-day weekend, but today is my first day back to work in 2012.

The Chicago White Sox and Toronto Blue Jays were busy yesterday, completing a New Year’s Day trade that sent reliever Jason Frasor back to Toronto in exchange for a pair of minor leaguers. Toronto also inked former New York Mets reliever Darren Oliver, who had more recently been part of the Texas Rangers bullpen, on Friday. On New Year’s Eve, the White Sox traded outfielder Carlos Quentin to the San Diego Padres for a pair of minor leaguers.

Meanwhile, we’ve heard very little from the New York Mets lately. Part of that is no doubt by design – there are fewer media leaks in Sandy Alderson‘s front office than there were in Omar Minaya‘s. Part of it is probably because nothing major is happening. With the 40-man roster full and most of the projected payroll dollars accounted for, we’re more likely to see minor league free agent signings than the splashy moves that were the hallmark of Minaya’s regime.

But that’s ok. Today, we are exactly seven weeks away from the start of spring training. Pitchers and catchers will report to Port St. Lucie on Monday, February 20th. The first workouts are scheduled for Wednesday, February 22nd and position players are due to report on Saturday, February 25th.

Nevermind the calendar you just hung on the wall that tells you spring officially begins on March 20th – we’re just 49 days away. I can hardly wait. 🙂

Twenty-one players have worn #49 in New York Mets history, according to Mets by the Numbers. Except for a few months in 1964 when Johnny Stephenson wore it, #49 went largely unused during the early years of Mets history. Since Kevin Kobel donned it in 1978, #49 has seen fairly regular usage – usually by pitchers. Jonathon Niese has a chance to unseat Armando Benitez as the most famous #49 in Mets history (and some might remember that Todd Hundley also wore it at the start of his major league career.)

A few items from other blogs to start your morning:

At Baseball Cards Come To Life, Bo asks current and former players about their thoughts on baseball cards. Yesterday, he caught up with the New York Mets’ 2004 first round draft pick, Philip Humber. While Humber only pitched briefly for the Mets, he was a key part of the trade that brought Johan Santana to New York.