Every time I throw this ball, a hundred different things can happen in a game. He might swing and miss, he might hit it. The point is, you never know. You try to anticipate, set a strategy for all the possibilities as best you can, but in the end it comes down to throwing one pitch after another and seeing what happens. With each new consequence, the game begins to take shape….In fact, the game wouldn’t be worth playing if we knew what was going to happen. 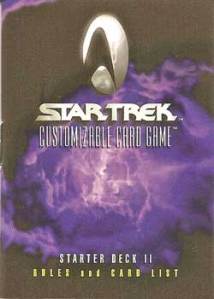 I stopped in the local comic shop this weekend, and found an old box of Star Trek game cards that had been marked down to two-thirds off. I played the game a little bit when it first came out, almost 15 years ago… but it was never really all that fun. (So of course, it was a challenge to find other players.)

I collected most of the original series — I’m pretty sure I still have them put away somewhere — and I stuck with it for one or two expansions. I’d quit before the First Contact or Deep Space Nine expansions came along though, so I never got to see those cards.

The Second Anthology box that I picked up for $12 included six promo cards, a pair of starter decks, and six booster packs: two each from the First Contact, Deep Space Nine and The Dominion expansions.

Check out some of the cards after the break: