Former Mets pitcher Dillon Gee is in spring training with the Kansas City Royals, hoping to win a spot in the team’s rotation or as a swingman in the bullpen.

“It was bittersweet, obviously,” Gee told the Kansas City Star’s Rustin Dodd about his departure from the Mets. “I had been there going on five years in the big leagues, and it’s like: ‘I was there during the lean times. I wanted to be there when they were celebrating at the end.’ ”

“It wasn’t the best of circumstances, but things unfolded the way they unfolded. They went to the World Series, so obviously they pulled the right strings, I guess.”

Michael Cuddyer suprised us all this weekend by announcing his retirement from baseball.

Baseball is my life’s passion, but at the same time I knew in some distant part of my heart that it wouldn’t and couldn’t last forever. Ever since I was a kid, my mantra has been, “Play hard, dream big.” But I’ve always believed in loyalty to the game itself: the day that I can’t give it 100 percent is the day I have to walk away. Now that the day has come, it’s harder than I thought it would be.

END_OF_DOCUMENT_TOKEN_TO_BE_REPLACED

Dillon Gee‘s time in the Mets’ organization came to an end yesterday as the 29-year-old pitcher elected free agency. (The Mets were all but certain to non-tender him on December 2nd had he not done so.)

Flipping back through my scorecards from games I attended, I last saw Gee pitch for the Mets on June 9. He gave up three hits, including a home run by Joe Panik, in a 1 2/3 inning relief appearance.

Last year, I watched Gee pitch twice, including his Opening Day start against the Washington Nationals. That day, Gee allowed four runs on four hits (including a two-run homer by Adam LaRoche) over 6 2/3 innings while striking out five. He had been in line for a victory until Bobby Parnell blew the save in the 9th.

I saw Gee pitch again on April 5, when he allowed three runs on 6 hits over 7 1/3 innings against the Cincinnati Reds. That day, he surrendered home runs to Ryan Ludwick and Brandon Phillips en route to another no-decision in a game the Mets won on Ike Davis‘ walk-off grand slam.

Gee was never a flashy superstar like Matt Harvey or Dwight Gooden… and he couldn’t blow you away with amazing stuff like Jacob deGrom or Noah Syndergaard. He was just a guy who made the most of the talent that he was given… and he put together a pretty good major league career with the Mets. I hope some other team will give him a chance to continue it.

I think we all recognized the need for concern when Zack Wheeler was scratched from his scheduled spring training start last weekend and sent for an MRI on his elbow, no matter how much the Mets tried to downplay its significance.

And today, we got the news we were dreading:

For the short term, I guess this moves Dillon Gee back into the rotation. Some fans would rather see Noah Syndergaard or Steven Matz get the opportunity, but there’s no way Sandy Alderson is going to put either of them on the Opening Day roster and lose a year of control when he could bring them along at the end of April and delay their free agency by a year.

There will be more opportunities. Bartolo Colon turns 42 in May – what are the odds he stays in the rotation all year? Gee and Jonathon Niese don’t have the best track records for staying off the DL, either. And nobody really knows what to expect from Matt Harvey in his first year back from Tommy John surgery.

I’m more interested in how Alderson the loss of Wheeler and Josh Edgin impact the bullpen. Going into the spring, six of the seven spots seemed to be set with Jenrry Mejia, Jeurys Familia, Vic Black, Edgin, Carlos Torres and Gee. With Edgin gone for the year and Gee likely back in the rotation, there are suddenly three openings for a group of relievers who haven’t done a lot to impress this spring.

I’m not worried about the Mets’ rotation, even with the loss of Wheeler. But the relief corps is another story. Bobby Parnell will be back eventually, and maybe someone else steps up to join the four reliable relievers out there. Let’s hope for the best. 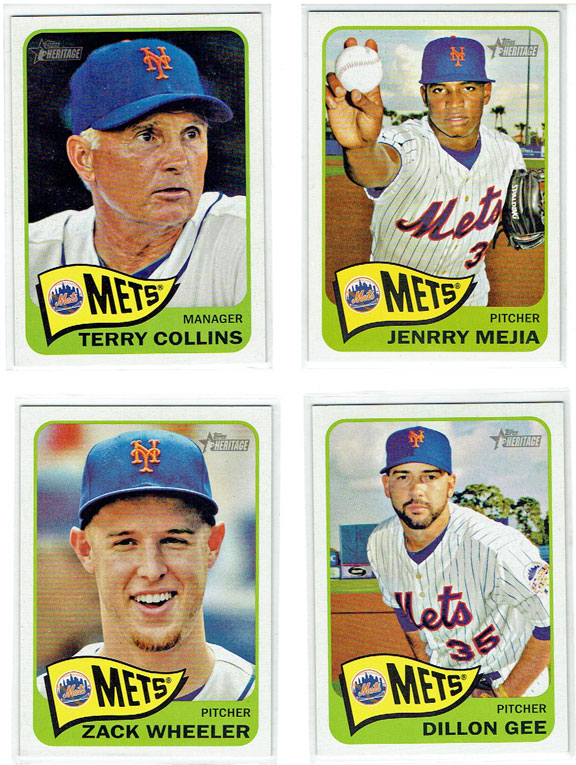 There are just 14 games to go in the Mets’ season, and I’m still putting together my 2014 Topps Heritage team set.

One of the readers of my website was kind enough to offer to send me four of the cards that I still needed – Terry Collins, Jenrry Mejia, Zack Wheeler and Dillon Gee. (How many of them will be Mets in 2015?)