CBS Sports’ Jon Heyman reports that the Mets will open contract negotiations with David Wright and hope to make him a “Met for life.”

The Mets are expected to open negotiations with an offer for somewhere in the neighborhood of $100 million for star third baseman David Wright, people familiar with the team’s thinking said.

My initial thought was that the Mets were making a lowball offer, but $100 million is a fair place to open. Ryan Zimmerman signed a six-year, $100 million extension in February and Jose Reyes took a six-year, $106 million contract from the Marlins last December. (Unless Wright is ready to offer the Mets a “hometown discount,” I do expect they’ll have to improve on their opening offer if they’re serious about keeping him.)

I guess we’ll find out how interested Wright is in hanging around for the rest of the Mets rebuilding process.

Heyman also reports that the Mets are reluctant to offer R.A. Dickey more than two years. Considering what’s happened with Johan Santana and Dickey’s age, that seems like a reasonable precaution to me. (I know guys like Tim Wakefield continued to pitch effectively well into their 40s, but Dickey is a different kind of pitcher than just about every knuckleballer that came before him. His career is going to continue to follow its own path.)

I won’t fault Dickey if he opts to try for a better deal than the one the Mets end up offering this winter, but I will blame Sandy Alderson if he lets Dickey leave at the end of the 2013 season without making a serious attempt to trade him if the contract negotiations fall through.

Pitchers Pat Misch and Mike O’Connor, who both seemed to fall out of favor with the current Mets administration, were among 22 Triple-A players that declared free agency at the end of the minor league season.

Former Mets top prospect Lastings Milledge was also among the group of players declaring free agency. I’ll always wonder if he was really that over-hyped, or if he just underachieved with his baseball talent.

In other news, Johan Santana pitched in an instructional league game on Friday as he continues to rehab from shoulder surgery, according to ESPN New York’s Adam Rubin. The Mets are projecting that Santana will be part of the 2012 starting rotation… I’m just curious about what we can realistically expect from the former All-Star. 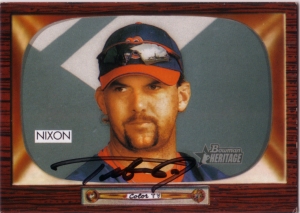 Trot Nixon filed for free agency, becoming the 11th and final Met to do so this offseason. Met fans will be forgiven if they don’t recall the one-time Red Sox star’s time in New York — Nixon’s Mets tenure included just 35 at-bats and a length disabled list stay.

I will be shocked if Trot Nixon is back in New York next year. If he wants to continue his playing career, I wish him the best. It’s time for the Mets to turn the page and stop relying so heavily on older players.

Pitcher Orlando Hernandez filed for free agency yesterday. El Duque was a key part of the Mets’ regular season success in 2006 after coming over from Arizona in exchange for reliever Jorge Julio. The oft-injured pitcher was a useful member of the Mets’ rotation when healthy.

However, he missed the entire 2008 season due to injury. At his age – whatever it may really be – I can’t see any team taking a chance on Hernandez. He had a good career, and he’ll always be remembered in New York. (Just not as a Met) 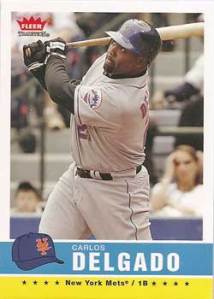 The Mets picked up 1B Carlos Delgado’s option for 2009 today. Nobody would have bet on them doing that back in April or May. After his second-half performance, though, the move was kind of a no-brainer.

I don’t know if Delgado is capable of putting up those numbers again in 2009, but there’s little to lose by giving him a shot. And the Mets could still try to sell high and trade Delgado to address some of their other needs, though I do expect him to be the first baseman when CitiField opens next April.