Heath Bell, 37, was in camp with the Washington Nationals this spring. He walked five and gave up seven hits while allowing four earned runs in 6.1 innings in Grapefruit League competition, and was not expected to earn a spot in the Nationals’ bullpen.

I’ll remember Bell for two things: first, his entrance to the 2011 All-Star Game.

Second, for signing autographs for fans at nearly every Mets game I went to at Shea Stadium in 2005. END_OF_DOCUMENT_TOKEN_TO_BE_REPLACED

John Buck was already a former Met by the time this card came out last year. Buck got off to a hot start to the season and then was traded to the Pittsburgh Pirates along with Marlon Byrd to obtain Vic Black and Dilson Herrera on August 27th, 2013. You couldn’t ask for much more from a player who was essentially a throw-in in the R.A. Dickey trade. Buck played in a handful of games for the Mariners and Angels this year, but also spent time in the minor leagues.

Zack Wheeler‘s rookie card was the more in-demand of the pair of Mets in this set. Wheeler has the stuff to be a frontline starter in the major leagues, but he’s still trying to put it all together. He went 11-11 with a 3.54 ERA in his first full big league season, and he improved on his strikeouts per nine innings, walks per nine innings and home runs per nine innings numbers from his rookie year. Wheeler’s combination of major league success and potential (he’s just going to turn 25 next season) have made him the subject of trade rumors, but I find it hard to believe that the Mets will let him go now.

Topps Heritage fans – do you get the High Number update series, or do you count your set complete with the pack-released cards?

In a sign that Opening Day is getting closer, Matt Harvey became the first Mets pitcher to bat in a Grapefruit League game today in the Mets’ 8-5 loss to the Washington Nationals.

“We decided when we started spring training that starting the 13th, against National League clubs, our pitchers are going to start hitting,” [Manager Terry] Collins said. “It’s a big part of the game. … There’s no reason why they shouldn’t get some quality at-bats because they’re baseball players once they get the bats in their hands so we got to get them ready.” (via NJ.com)

Now if only we could be rid of the designated hitter in all of the rest of the games, major and minor league.

In a less welcome sign that Opening Day is getting closer, ESPN New York’s Adam Rubin explains why prospects like Travis d’Arnaud and Wilmer Flores will soon be sent over to minor league camp:

Generally, if 40-man-roster players remaining in major league camp become injured within 15 days of Opening Day, they earn major league service time and pay and have to land on the disabled list to open the season until they heal.

That’s too bad, because getting a look at the kids is the most interesting part of spring training. Let’s face it, we’ll see enough of John Buck and Anthony Recker beginning in April. (Though I wouldn’t mind seeing Daniel Murphy in some real spring training games soon – just how serious is a strained intercostal muscle supposed to be, anyway?)

Still, happy thoughts: we’re one week from the official end of winter, and less than three weeks from baseball games that count for something other than national pride.

It’s official: the trade between the New York Mets and Toronto Blue Jays is a done deal.

I hate that the Mets are in a position where trading the reigning Cy Young Award winner makes sense – I’d much rather be thinking about winning the World Series than how many more years until they’ll have a shot to make the playoffs again.

But let’s be clear about something: the New York Mets were not going to the playoffs in 2013 with or without R.A. Dickey. They finished 74-88 this year with him, and were not in a financial position to add enough pieces through the free agent market to substantially improve.

Even if they did have the ability to spend like the Dodgers and decided to overpay Josh Hamilton, Michael Bourn and Nick Swisher to play the outfield and got Rafael Soriano and a few other free agent relievers for the bullpen, there’s no guarantee those moves would have made the Mets better than the Nationals and the Braves.

The Mets have been selling a “plan” of waiting until 2014 when the bloated contracts that Omar Minaya gave to Johan Santana and Jason Bay finally expire. But next year’s free agent class is likely to be as disappointing and overpriced as the current one, and there are no legitimate prospects at the upper levels of the farm system besides Zack Wheeler and Wilmer Flores, who doesn’t really have a position now that David Wright is locked up.

So before today’s trade, all we really had to look forward to in 2014 were players who’d be another year older.

END_OF_DOCUMENT_TOKEN_TO_BE_REPLACED

The New York Mets will play their first game at the Miami Marlins new ballpark tonight.

Perhaps fittingly, I got a surprise package from my friend Greg yesterday containing a few things that he’d gotten signed during spring training this year. 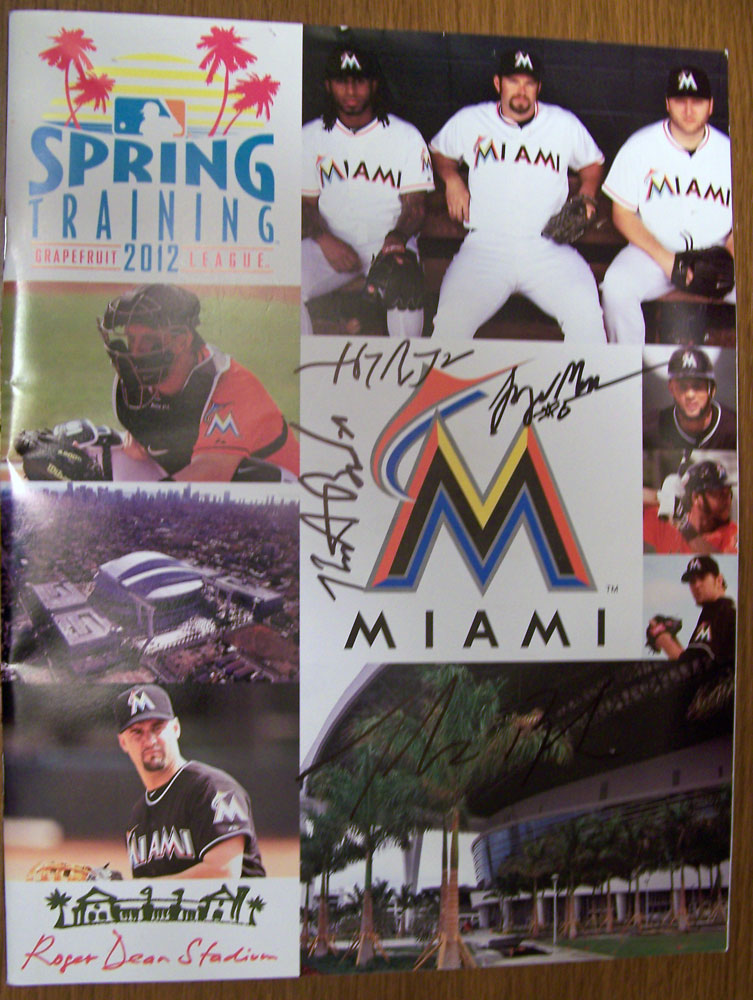