The Milwaukee Brewers have released former New York Mets pitcher Pat Misch from a minor league contract to allow him to pursue an opportunity in Japan with the Orix Buffaloes, the team announced via Twitter.

Edit: YakyuBaka reports that the Orix Buffaloes have announced an agreement with Misch, with a press conference scheduled for Feb. 24.

Misch, now 34, last pitched in the majors with the Mets from 2009-2011. Since leaving the Mets, he has pitched for two area teams, the Lehigh Valley Iron Pigs (Triple-A, Philadelphia Phillies organization in 2012) and the Lancaster Barnstormers (independent, in 2015.)

Misch has also played in more exotic locales, such as Santurce in the Puerto Rican Winter League in 2014 and Lamigo in the Chinese Professional Baseball League last season.

Baseball America‘s John Manuel spoke with Misch about the memorable way he finished the season. Misch appeared in four of the seven games of the championship series, and threw a no-hitter in the final game.

“They asked me after the game if I could start Game Seven,” he said. “I said, ‘Absolutely.’ I couldn’t sleep that night. My body felt great; my arm felt great. I just kept thinking, there’s no way we’re losing this game. I had no thought to pace myself. I just felt so good.”

“Absolutely, it was the best game I’ve ever pitched.”

It’s going to be tough to top that, but I hope Misch continues to enjoy success in 2016. 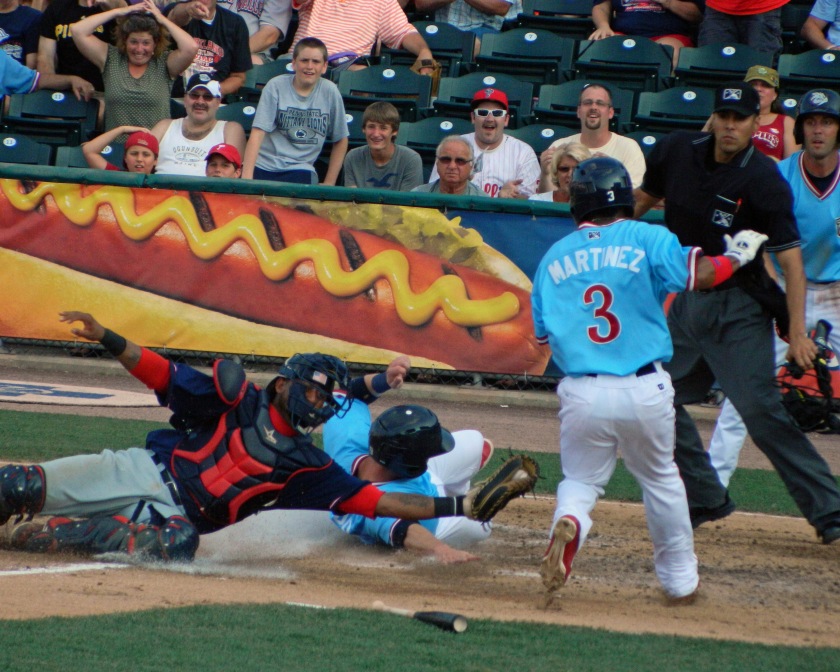 Since I got to see a Lehigh Valley Iron Pigs game earlier this year, I decided to order their 2012 team set. They’re available via the team website for $10, plus $5.95 shipping & handling (if you’re not ordering any other items).

The set includes 30 cards, produced by Choice SportsCards. Phillies fans will notice a number of players that have had to fill in on the major league club due to injuries, while Mets fans may notice Pat Misch and Raul Valdes, and everyone can appreciate a baseball card of Hall of Famer Ryne Sandberg.

Despite the wet weather yesterday, Freddy and I made the trip to Allentown, Pa. to see the Louisville Bats take on the Lehigh Valley Ironpigs. The evening’s promotion was a team photo giveaway and pregame  autograph session.

It was the best-organized autograph session I’ve ever seen. Staff members handed out maps showing where all of the players and coaches would be signing along with the team photo giveaway. There were two or three people per table, and nearly the entire team participated.

Ryne Sandberg had the longest line, but if you went to his table as soon as you got in the gate, you probably were able to get his autograph. He was signing everything from baseball cards, to baseballs, bats and even a Cubs jersey.