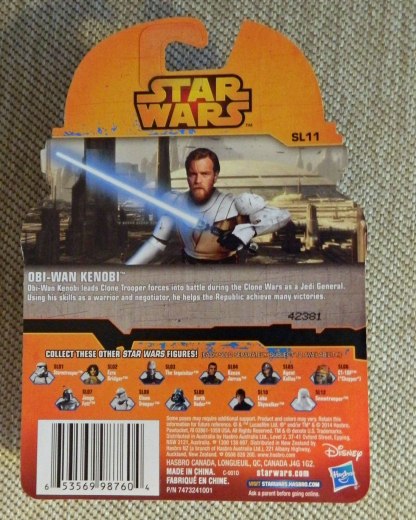 The Star Wars Rebels action figure line has been largely populated by re-issued toys that don’t have any real connection to the cartoon airing on DisneyXD.

The Obi-Wan Kenobi figure was first released earlier in 2014 in Saga Legends packaging, and it wasn’t very popular with collectors. Sporting just five points of articulation and a simplified paint scheme, this version of Obi-Wan is universally agreed to be inferior to the Vintage Collection version Hasbro released in 2012.

However, I see one redeeming feature – the Rebels version of a realistic-style General Kenobi from The Clone Wars movie is more affordable. The Vintage Collection version will run in the neighborhood of $25 if you track it down, while you can probably still pick this one up at retail price.

END_OF_DOCUMENT_TOKEN_TO_BE_REPLACED

I got a package of four figures from Dorkside Toys today that was either a late Christmas present (since it was paid for with Christmas money) or an early birthday gift (since my birthday is later this month.)

Of course, that forced me to rearrange some of my display shelves to find room for my new acquisitions.

My Dancing Groot bobble head decided he was more at home among actual plants, so he didn’t present any immediate organizational challenges.