The Atlantic League’s Sugar Land Skeeters are five games under .500 for the season and will miss the playoffs after going to the championship series last year.

But they gave their fans something to talk about today.

From a press release posted on the Atlantic League’s website:

The Sugar Land Skeeters and manager Gary Gaetti announced the signing of four-time MLB All-Star and three-time Gold Glove winner, Rafael Palmeiro to the Skeeters. Rafael joins his oldest son, Patrick, for the final three games of the season. Palmeiro is one of five members of the 500 home run and 3,000 hit club, which includes New York Yankees DH Alex Rodriguez and Hall of Famers Hank Aaron, Willie Mays and Eddie Murray.

“We discussed me playing earlier this year and it’s something I’ve looked forward to since then,” Palmeiro said. “The chance to play with my son is an opportunity the Skeeters have offered me and I’m very excited to make it happen this weekend.”

Hardball Talk’s Craig Calcaterra writes: “Kudos to the Skeeters for giving [Palmeiro] the opportunity to do something a lot of fathers dream about. And kudos to them for giving fans — way fewer of whom give a rip about the PED stuff than people think — a chance to see something neat.”

I’ll point out that signing a 50-year-old who last played professionally 10 years ago doesn’t say anything good about the quality of play in the Atlantic League.

But if you’re curious, you can see how Palmeiro’s weekend goes on ESPN3…. the Skeeters’ home games are broadcast on WatchESPN.com and SugarLandSkeeters.com 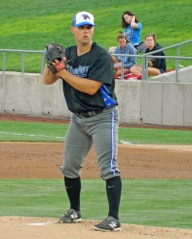 After a travel day on Thursday, the Freedom Division series resumes at TD Bank Ballpark in Bridgewater at 7:05 p.m. on Friday.

The Long Island Ducks bested the Southern Maryland Blue Crabs 6-2 in the first game of the Liberty Division series on Wednesday night.  (box) John Brownell earned the complete game victory for the Ducks, striking out 12. Nick Schwaner and Jeremy Owens hit home runs for the Blue Crabs, while Bryant Nelson and Adam Bailey homered for the Ducks.

The Somerset Patriots beat the Sugar Land Skeeters 6-5 (box) in a see-saw game that opened the Atlantic League playoffs on Tuesday night.

Somerset took an early lead thanks to Jeff Baisley‘s second inning solo home run, but Sugar Land tied the game in the third and took a 3-1 lead in the fourth thanks to Brian Burgamy‘s two-run homer.

The Patriots drew closer in the fifth thanks to an unearned run, and went ahead for good in the sixth when Burgamy’s 2008 Newark Bears team mate Cory Aldridge hit a two-run homer of his own to make it a 4-3 game.

The Patriots and Skeeters traded runs in the seventh and eighth, with Aldridge adding a second home run, and the game went to the ninth with the Patriots leading 6-5. Patriots closer Jon Hunton struck out Josh Pressley and got Burgamy to fly out with the tying run on base.