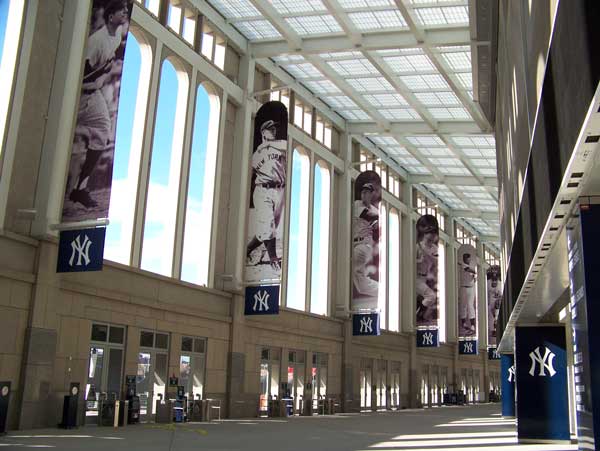 Remember the days when it felt like the Mets’ owners just viewed their fans as walking wallets? They still screw up sometimes, but they’re doing better. (Winning also helps.)

Yankees fans aren’t so lucky. This week, the Yankees announced that they are doing away with print-at-home tickets, ostensibly over counterfeiting concerns. Traditional paper tickets, which can also be counterfeited, are still being used.

So it really seems like an escalation of the Yankees’ war against StubHub. The new policy adds an extra barrier to buying tickets from StubHub on the day of the game – you would have to pick up your paper tickets at a StubHub office about half a mile away from the stadium.

If you buy your tickets on the Yankees’ ticket exchange, which will not let sellers offer their tickets below the face price, you will be able to have them sent to your smartphone. (No smartphone? You’re still out of luck.)

When Yankees Chief Operating Officer Lonn Trost went on WFAN’s Boomer and Carton show, he made his feelings about some of his team’s fans pretty clear:

“The problem below market at a certain point is that if you buy a ticket in a very premium location and pay a substantial amount of money. It’s not that we don’t want that fan to sell it, but that fan is sitting there having paid a substantial amount of money for their ticket and [another] fan picks it up for a buck-and-a-half and sits there, and it frustrates the purchaser of the full amount….And quite frankly the fan may be someone who has never sat in a premium location. So that’s a frustration to our existing fan base.”

Trost is being a bit ingenous when he talks about premium seat tickets selling for $1.50, but even if that happend, so what? When you go to a baseball game, do you ask the person next to you how much they paid for their seats?

Cal Ripken Jr. wants to turn youth baseball into baseketball to attract more kids, but it’s clear that teams have an idea about which fans should be at MLB games.

That’s just the latest example of what happens almost every time a ballpark gets renovated or replaced… affordable seats get replaced with more expensive ones.

On some level, the folks in charge at MLB want to go back to the days when baseball was America’s game. But it’s going to be hard for that to happen as long as executives keep making decisions that prioritize maximizing short-term revenue gains over growing the number of baseball fans.

The New York Mets put Opening Day tickets on sale this morning, and a lot of Mets fans experienced a bit of sticker shock.

As Shannon reports at Mets Police, it would cost a minimum of $63 (before fees) to go to the game on April 1st. And I’d feel like an April Fool to pay that much to watch a baseball game with a view like the one here. Decent seats – in the Promenade Infield or Promenade Box categories – cost $84 (again, before fees.)

Want to be at field level? It’s going to cost $130 to sit in the outfield, or $165 to sit in the cheapest baseline category (once again, before fees.)

Two tickets, opening day in the uppers (bot not behind home plate) $142.50

Seriously folks, think long and hard if you want to support this one.  Wow.

Ownership’s instinct is clearly telling them to maximize their profits on one of three games that could be a sellout in 2013.

If they can sell all of the seats at these prices, they were right. (How often has Mets ownership been right about anything recently?)

Ten hours later, they still had tickets available in the cheapest category – no instant sellout here.

I think I’m going to skip opening day next year. If the Mets were going to put together a big, splashy off-season like they did before the 2005 season, I’d be more likely to set common sense aside – but it’s just not worth spending that much money to go to a game that I can watch on TV with a better view.

And guys, I hope that you plan to announce new contracts for David Wright and R.A. Dickey soon…

I barely realized that Tim Byrdak had landed on the disabled list last week while the Mets were playing in California, but it seems all too likely that he has thrown his last pitch of the 2012 season. He has been diagnosed with an anterior capsule tear in his left shoulder, which is the same injury that forced Johan Santana and Chris Young to have season-ending surgery in recent years.

Given Byrdak’s age, I have to wonder if he’d going to try to continue pitching or if he’ll just retire. In either event, I wish him the best.

The Mets sent out a renewal notice to their season ticketholders and it sure looks like prices are going to go up in 2013. I’d sure like to know what the Wilpon family is thinking – the Mets have not exactly been working on a sellout streak at Citi Field.

We should get to see the 2013 All-Star Game logo this afternoon. Hopefully whoever designed the logo for Citi Field’s inaugural season was not involved in any way.

Oh, and I got to see the Newark Bears win a game for the  first time in ages last night. (For the curious, Kansas City T-Bones’ first base coach Frank White does not travel.)

Yesterday, I attempted to take advantage of one of the Mets’ single game pre-sale opportunities to buy tickets for Opening Day and Banner Day. It took about ten minutes to get out of the “virtual waiting room” in the morning. (I checked back later in the day with no wait.)

For Opening Day, I was offered a choice of Promenade Reserved, Promenade Outfield, and tickets that cost more than I was even willing to consider. So I picked Promenade Reserved and was offered Section 528 for $50 per seat plus a $7 fee per ticket.  I wasn’t thrilled, but Banner Day had to be cheaper, right?

For the May 27th game, there was a larger selection of seating categories. I picked Promenade Box, but could have chosen Promenade Reserved, Promenade Infield, Pepsi Porch or Left Field Landing for the same price – $40 per seat plus a $6 fee per ticket.

To go to two baseball games and sit in the upper deck, it would cost $103 per seat plus a $6 per order fee!

Let’s put that in perspective. Last year, I spent $123 for a Promenade Infield seat for Opening Day and five other games through a flex plan promotion. (The Mets did not charge any per ticket or per order fees.)

I ended up not placing the order.

Yesterday evening, I decided to take a better look at the six game marquee flex packs being offered this year – maybe they’re a better value. I was able to put one together with Opening Day, Banner Day, three early-season weekend games and a game from Jose Reyes’ first series back at Citi Field for $128 per Promenade Reserve seat (I was offered Section 519.) Not too bad, right?

END_OF_DOCUMENT_TOKEN_TO_BE_REPLACED

There are four different 20-game packages; two feature weekend games, two are made of weekday games. Of the weekend plans, one has Opening Day, and the other has two Yankees games. These replace the old 15-game Saturday+, Sunday+ and Weekend+ packages.

The new 15 game plans allow you to select one of four Marquee Level games (Opening Day and the three Yankees games) and pick 14 other games of your choice. You may or may not keep the same seats for all of the games.

I like the idea that the new plans offer more fan choice, but Shannon at Mets Police did the math to show the new plans could work out to cost more money than the old ones.

I’m not really interested in making the trip from New Jersey to Queens 15 or 20 times next year, and my budget really can’t afford them anyway. (The cheapest weekend 20-game plan is $468 per seat; I have no inclination to do the math on the possible 15-game options.)

If the Mets bring back the 5 or 6 game packs that they offered this year, I’ll go for it again. If not, I’ll make a point of going to an April weekend game to see what changed at the ballpark & museum, and go to a few others somewhere along the way.

Speaking of Citi Field, the Mets shared a picture of the work on the outfield wall modifications yesterday.

One 2011 New York Mets player who won’t be back next year is Jason Pridie. The reserve outfielder signed a minor league deal with the Oakland Athletics organization, according to ESPN New York’s Adam Rubin. Best of luck!