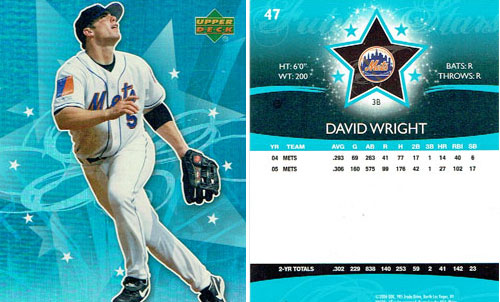 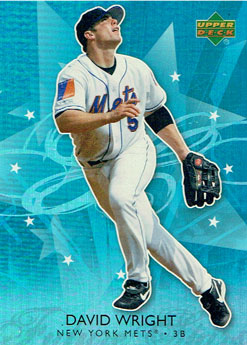 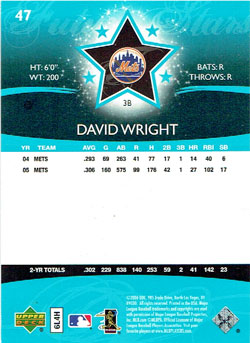 I got a box of about 500-600 recent New York Mets baseball cards as a birthday present last week. This 2006 David Wright card stood out for a couple of reasons:

I still remember watching Wright bat seventh in his major league debut against the Montreal Expos – a team that doesn’t even exist anymore. It doesn’t really seem like that long ago, but of the 14 players who appeared in that game for the Mets, I think only Wright, Jose Reyes and Ty Wigginton are still active major leaguers.

Some quick internet research tells me that Upper Deck didn’t release the 2006 Future Stars set until January 2007. Cards 1-75  follow an attractive “stars” theme and look like Wright’s, while cards 76-159 follow the “Clear Path to Greatness” theme and are some of the ugliest certified autograph baseball cards ever produced. Hobby boxes included 24 packs with four cards each, and guaranteed five autograph cards.