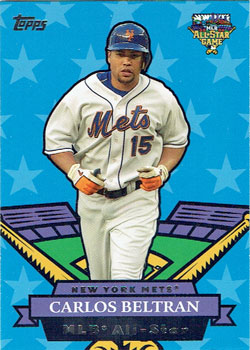 Major League Baseball provided the first update on 2014 American League and National League All-Star voting this week. David Wright trails Colorado’s Nolan Arenado and Milwaukee’s Aramis Ramirez at third base, but he’s the only Met who’s in the top five at his position.

In 2006, circumstances were very different – the Mets had six representatives on the All-Star team, including three members of the starting lineup. So baseball cards commemorating that All-Star Game have much greater potential to be interesting to a Mets fan than any for this year’s contest.

Topps produced a series of 12 All-Star insert cards that were included in 22-card Series One rack packs in 2007. Some of these packs recently resurfaced at select WalMart stores for the discounted price of 98 cents. Night Owl was kind enough to send me seven of the All-Star cards, including Carlos Beltran, one of two Mets players on the checklist.

I don’t remember seeing these cards before, but it has been seven years. Then again, I’m sure I would have made some kind of effort to collect the set. The bright, cartoon background reminds me of the spirit of the early 1990s oddball cards that I still love. END_OF_DOCUMENT_TOKEN_TO_BE_REPLACED

Dontrelle Willis, Ramon Castro and Ian Snell were among some of the ex-big leaguers who were on hand for the Long Island Ducks fan fest yesterday. Strong Island Grapher has a recap of the event from an autograph collector’s perspective.

Nine-time All-Star and 2004 American League MVP Vladimir Guerrero undoubtedly made the biggest splash when he signed on Thursday, but the Ducks followed that up by signing 2003 National League Rookie of the Year Dontrelle Willis on Friday.

The Ducks’ latest addition is former major league catcher Ramon Castro, who played for the New York Mets from 2005 until 2009.